Will you be able to handle? 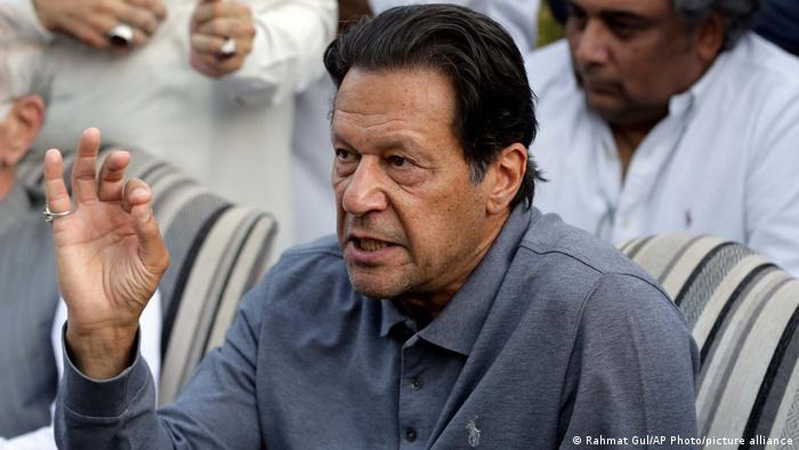 PTI Chairman Imran Khan on Wednesday appeared before the joint investigation team (JIT) formed for a probe into a terrorism case filed against him, a private TV channel reported.

The former prime minister arrived at the SPP office for a hearing as per the directives of an anti-terrorism court (ATC) that extended his pre-arrest bail for the second time on Monday. Speaking to journalists after appearing before the JIT, Imran Khan said that he and his supporters will come out prepared as much as the government troubles them. “They are trying to crush my party,” Khan said and warned that the government cannot withstand his protest call. “The more you push up against the wall, the more we are preparing [for it]. If I gave the call for Islamabad, you won’t be able to cope with it,” said Imran Khan.

In a message to the incumbent government, he said that the more they come after him, the more they should be “prepared”. The PTI chief said “a sea of people has started coming out and the government is unable to face the public”. “I was silent before because of the economic conditions, the floods came […] so we decided to protest peacefully,” the PTI chief stated.

“You will not be able to bear the day I give a call, because people are already cursing you […] you go out and public curses you […] PPP in Sindh is hiding. This is an imported government, robbers have been imposed on us through a conspiracy,” he said, adding that “free and fair” elections were the only way forward for the country.

Talking about the terror case against him, Imran said that “it is a joke”. “This is a joke in front of the entire world. Why? Because everyone knows me, there have been headlines across the world that an FIR (first information report) has been registered against Imran Khan on terrorism charges.” The entire world knows the definition of terrorism, he pointed out. “If you are slapping terrorism charges on me for saying that we will take legal action against the custodial torture [of incarcerated PTI leader Shahbaz Gill], then the entire world is laughing at you.”

The PTI chief further alleged that the government was cracking down on people who funded and supported the PTI and registered cases against them through the Federal Investigation Agency (FIA). “They are trying to close the space for us on media, they banned YouTube […] journalists and anchors they believed supported me are being booked under several charges,” he said. He added that on the one hand, the government was talking about not engaging in politics during floods, but on the other, it was trying its best to “crush” PTI. He lashed out at the coalition government over its alleged failure in controlling the economic crisis and said, “Pakistan is following in the footprints of Sri Lanka.” He maintained that they may hold negotiations with the government only on the topic of free and fair elections.

Moving on to the announcement of another series of countrywide protests, the PTI chair said that the government “will not be able to bear” a fresh call for protests. He said that he had stayed quiet due to the economic situation and then the cataclysmic floods, thinking that his party would record peaceful protests.

Earlier, in response to the JIT’s questions, the ousted premier maintained that he had called for legal action against the judge who had sent PTI leader Shahbaz Gill back on remand despite claims of custodial torture. According to a private TV channel, Imran was given a questionnaire containing 21 questions by the police team, and some questions were also asked verbally by the police. Reports said that he was interrogated for about 20 minutes by the investigation team headed by Senior Superintended of Police (SSP) Investigation.In the statement, he maintained that he did not commit any act of terrorism in his speech and his speech did not fall under the category of terrorism. He reiterated that he had referred to legal action.

Imran also handed a written statement to JIT in charge SP Investigation Rukhsar Mehdi. In the statement, Imran maintained that the police registered a case of terrorism against him due to pressure from the ‘imported government’.

He was asked if he had created an atmosphere of fear and panic by threatening police officers and the judge of the subordinate judiciary in a commanding manner, to which the ex-prime minister replied that no such thing occurred. “I think it is vindictive and false,” he said.

Separately, Imran Khan on Wednesday said that the PTI will help the flood-hit people in every possible way, after the relief they will build the houses of affectees.

Addressing the relief ceremony for the flood victims in Taunsa Sharif, the former PM said that he inspected the flood-affected areas by a helicopter, adding that Pakistan has suffered more damage than in 2010, and the whole nation will have to come together and help the flood victims.

The PTI chairman further said that he collected Rs10 billion during the 5 hours of the telethon, adding that the nation has never given so much money in such a short time because the whole nation is worried about the flood victims.