‘Wake up or break up’ 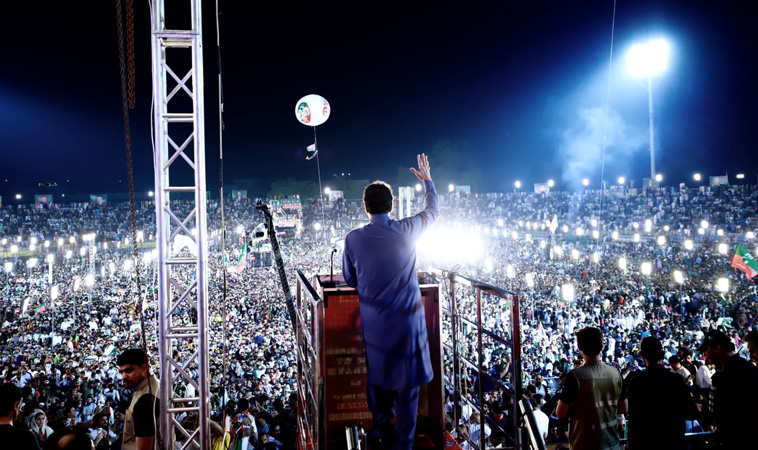 Pakistan Tehreek-e-Insaf (PTI) supremo and former prime minister Imran Khan on Saturday said that the nation will hold the establishment responsible if the country’s economy continues to decline.

“I am addressing the people who have the power,” Imran Khan said while addressing a public rally in Gujranwala. “I want to ask the establishment … the way this government is taking this country and economy down I know that you call yourself neutral but this nation will hold you responsible for the way the country is going down. They will hold you responsible because you could have prevented the country getting mired in this swamp but you did not do anything.”

“If the economy goes down, the national security will be effected because then we will be more helpless in front of foreign powers. There is still time.

Save this country from plummeting anymore,” he further said.

“The way this ‘imported government’ is taking the country towards destruction we might not be able to come out of this quagmire,” he said, adding that only early and fair elections could bring stability to the country. Towards the start of the speech, he addressed his party’s Insaf Student Federation (ISF) and the youth in general, and said he would need them both in the light of “things I am going to say ahead”. “The thing I am preparing this nation for … I would need the youth of this nation a lot for Haqeeqi Azadi (actual freedom),” he said, adding that the time has come to forcefully demand election.

He urged the entire nation and party workers to get ready for “peaceful protests” across the country in a bid to force the coalition government led by PML-N to call early elections. Imran said after the postponement of by-elections it was apparent that the incumbent rulers were “running away” from the early elections. “Without free and early elections, the economy will continue to sink I will give a call soon for protests. We have to snatch the freedom,” he added.

Imran said the government tried suppressing his support among the public through the use of force and tear gas shelling, thinking that “they will be scared and are mummy-daddy and won’t be able to take pressure.” “They still did not succeed and people still came out in every rally. I’ve been holding rallies for six months now and the nation has come out in big numbers in every one of them.”Imran alleged that in the Punjab by-polls as well, the system was rigged against him to fail through the help of a “dishonest” chief election commissioner and Mr X. “They lost despite all this and so now their wish is to disqualify Imran Khan.” He claimed that his political opponents want him “to not play at all” and are attempting to have him disqualified through legal lawsuits. “They filed a case of disrespecting religion against me even though chants against them were raised in Medina. Imran Khan, the ousted prime minister, also announced the acceptance of the verdict of the Islamabad High Court (IHC) in the contempt of court case. The PTI chairman said he always respected the Islamabad High Court and IHC Chief Justice Athar Minhala for their wise decisions.

“I am not saying this because my case is being heard in the court but I truly acknowledge their judgements despite the fact that the court did not allow me to speak otherwise, I might get a chance to present my viewpoint and clear my position,” he said and clarified that his remarks were not against the judge but over alleged inhuman attitude against Shahbaz Gill who he said was neither killer nor terrorist but badly tortured in the custody. He also played Gill’s video in the public gathering and said his reaction was over brutality against Shahbaz Gill.

The former premier also said those who hatched a conspiracy against his government are now trying to disqualify him. Dozens of cases, even terrorism and blasphemy, have been registered against him. “Earlier, with the help of ‘Mr X’ and teaming up with the Election Commission of Pakistan (ECP) and administration the imported rulers tried their best to rig the July 17 bye-election but failed miserably. Now they have run from by-election just a couple of days before the schedule because they know it would be impossible to defeat the PTI through the ballot.”

He asked the youth that he needs their support for his struggle for real independence and underscored the need for rule of law and justice in the country. “I am ready to sacrifice my life for real independence in the country. Jail is a little thing if the country got real independence,” added. The PTI chief reiterated that his government was sent packing on the pretext of inflation. “In fact, the country’s economy was growing at the highest rate in 17 years. The country’s exports were at the highest level. Remittances were at record levels. The conspiracy was hatched against my government because I was not ready to accept the slavery of foreign powers. India was buying 40% cheaper oil from Russia but Pakistan could not avail this opportunity.”