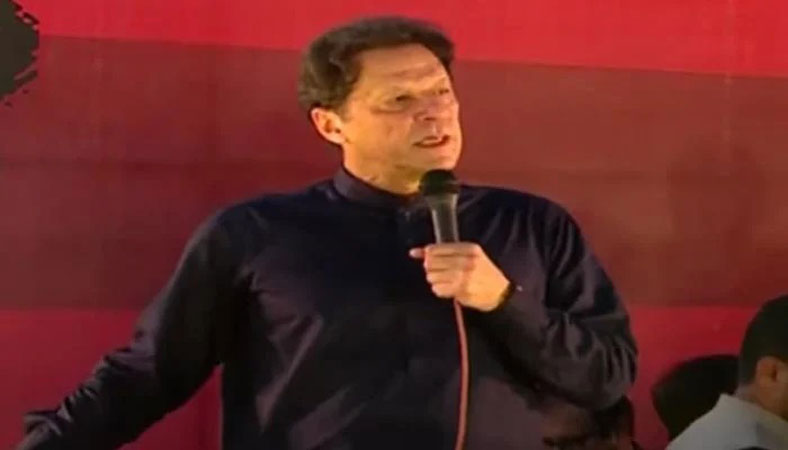 Former prime minister and PTI Chairman Imran Khan on Saturday said that he will help the flood-affected people but will not stop his campaign for real independence.

Addressing a party rally in Jhelum, the PTI chief announced to establish a fund to collect donations for the flood-affected people of the country, adding that Dr Sania Nishtar will head the relief and rescue fund collected via telethon.

The PTI chief said that these are testing times and he believes that the Pakistanis will come out of this crisis as a strong nation. “Overseas Pakistanis have always helped, may it be the floods of 2010 or the Kashmir earthquake in 2005,” said Imran Khan will calling for the country’s vibrant diaspora to help their countrymen in this hour of test.

Imran Khan said that his struggle against the “thieves” will continue whether it is raining or hot weather. “I have struggled for 26 years while remaining within the boundaries of law and Constitution,” he said.

Talking about the Sharif and Zardari families, Khan claimed that Pakistan was at the top before they ruled Pakistan. “Nawaz Sharif looted the country and is now telling us what to do,” he added.

The ex-premier said that the floods have affected Balochistan, Sindh and Khyber Pakhtunkhwa. “How will the provinces generate surplus after all the destruction caused by rains?” he asked, adding that KP’s Finance Minister Taimur Khan Jhagra has been asking to meet Finance Minister Miftah Ismail for two months. The PTI chairman said that the government should hold talks with the International Monetary Fund (IMF). “Shahbaz Sharif and Miftah Ismail say that the IMF programme will be delayed because of us,” he said. Imran Khan said that Miftah Ismail should talk to the IMF to negotiate on conditions for tranche as he did being the premier when the Covid-19 pandemic hit. “Don’t be scared of the white skin … show some courage,” he called out the finance minister. 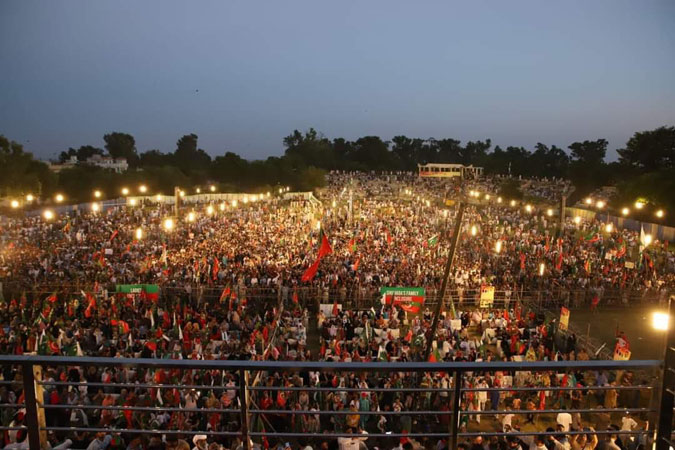 The former prime minister also questioned the government on what it was doing for the nation as the flood warning had come a long time ago. “The government was making conspiracies instead of making policies to deal with floods,” he added.While berating the allied parties, Khan claimed that they do not know how to run the government and that the PDM had been imposed on the nation. Khan said that this conspiracy is not against him but to weaken the country’s democracy, adding that the [government] is cornering PTI and are trying to make me ineligible. He continued to say that the allied parties are scared of the elections because the PTI will beat them. The ex-PM said that a nation can only come out of a catastrophe by dealing with it together. PTI chairman said that the PTI government initiated construction of 10 dams during its 3.5 tenure which was inevitable to stop or at least alleviate floods. He said that water reservoirs would convert what is now a natural disaster into a blessing.Ex-PM asked the previous governments why they did not build any dams in the country. He said that Nowshera and Taunsa would have flooded had PTI’s provincial governments not built embankments, asking what PML-N and PPP did during their regimes.

PTI chairman reiterated that the government – after trying everything against him and failing at it – wants his technical knock-out by disqualifying him for life. My nation knows me, I have always remained within the ambit of law even when PTI leaders and workers were assaulted on May 25, he said.

The ex-PM also censured the government for charging him in a terrorism case and alleged torture of his aide Shahbaz Gill – who was charged with sedition – and said it only brought humiliation to Pakistan globally.

Imran Khan said some Mr Y has been assigned a mission in Islamabad to intimidate PTI. He said the arrests of journalists, off-airing of a television channel, and pick-up of social media activists were part of the scheme to frighten the biggest political party of Pakistan.

He added that PTI was being sidelined, which he termed as a conspiracy against Pakistan and its democracy, despite claims that politics should be set aside when the country was facing a calamity. However, he vowed to struggle against the incumbent government till his stamina lasts.