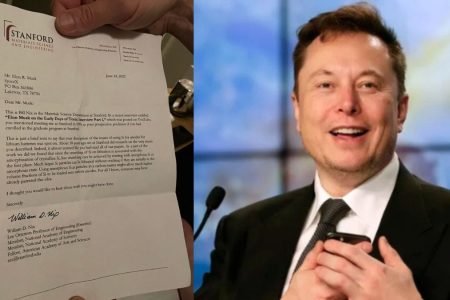 Elon Musk shares letter sent by Standford professor. Tesla CEO and billionaire Elon Musk shared the image of a letter he received from a Stanford lecturer. The lecturer said he would have been Musk’s professor if he had not dropped out.

The letter, which was sent on June 14, mentioned a research paper that the billionaire would have worked on. If he had not put his studies on “permanent deferment”.

The SpaceX chief took to Twitter to publish the letter and wrote: “Nice letter from Bill Nix, who would’ve been my prof at Stanford if I hadn’t put grad studies on (permanent) deferment.”

Elon Musk shares letter sent by Standford professor. And the letter begins with the introduction of the teacher revealing that William D. Nix is a professor of engineering at the department of Material Science and Engineering at Stanford University.

Nix was responding to Musk’s recent interview where he mentioned meeting Nix in 1995 as his prospective professor.

In the letter, Nix also hailed the billionaire for his “description of the issues of using Si for anodes for lithium batteries”.

The post has garnered over 144,000 likes and hundreds of comments.

“There would be no Tesla, SpaceX, or even PayPal, if you continued your studies instead of developing companies,” said another.