* The group first came to prominence with their covers of head-nodding hip-hop classics from the likes of J Dilla and Nas, before featuring with flautist Tenderlonious 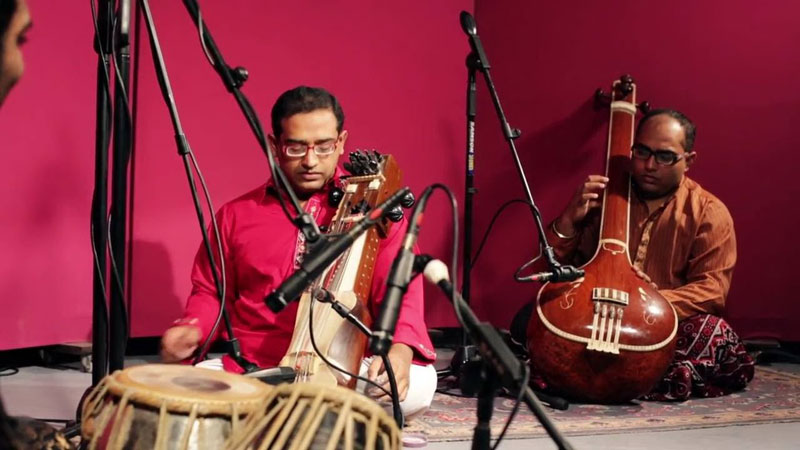 Pakistani quartet Jaubi are best described as improvisers rather than a band that operates within a particular genre.

Although their instrumentation – featuring the tabla and stringed sarangi – might reference south Asian classical traditions and their collaborators Tenderlonious and Latarnik come largely from the world of jazz, theirs is a music that traverses traditions.

The group first came to prominence with their covers of head-nodding hip-hop classics from the likes of J Dilla and Nas, before featuring with flautist Tenderlonious on the spiritual jazz-inspired Ragas from Lahore in 2020. Last year they released their debut album, Nafs at Peace, which consisted of electronically inflected ragas. For tonight’s debut UK performance, they lean towards the intersections between jazz soloing and the melodic cycles of Indian classical music – with a hint of swing thanks to the ride cymbal work of guest drummer Tim Carnegie, who sits in for usual percussionist Qammar Abbas.

The group fit perfectly into the spiritual surroundings of the Union Chapel by setting an opening tone of calm introspection with two unnamed ragas. Each brief composition is given a keening melodic voice through Zohaib Hassan Khan’s soft sarangi lines. As they warm up into a more kinetic register with the polyrhythmic intro of Satanic Nafs, tabla player Kashif Ali Dhani’s intricate voicings begin to bounce across the cavernous space, enveloping the diverse audience.

Highlights during the 90-minute set come when Jaubi’s sound unapologetically fills the room. They back a blistering, John Coltrane-inspired soprano saxophone solo from guest Tenderlonious on a buoyant version of the track Nafs at Peace, while Raga Gujri Todi builds from an ambient opening featuring Latarnik’s undulating synth pads into a fierce sarangi solo. Here, Khan effortlessly meanders between raga and jazz voicings, sometimes in a single melodic line, showcasing Jaubi’s natural fusion.

Through eschewing the formalities of classical traditions, Jaubi make their UK debut a uniquely confident display – even if it is missing an acknowledgment of their early boom-bap days.

With their eyes largely closed, the band feel their way through their compositions, wordlessly intuiting the next note as it arrives – sometimes coming as much of a surprise for the listeners as it is for the group themselves.