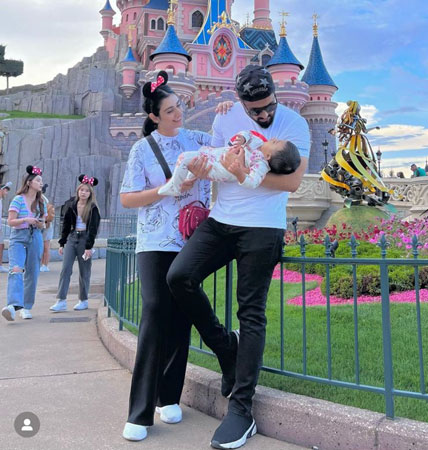 Actor Sarah Khan shared pictures of her family outing at Disneyland Paris and they are going viral across social media platforms.

Sarah Khan, husband Falak Shabir and daughter Alyana Falak had the time of their lives at the amusement park in France’s capital Paris. The viral pictures on Instagram got thousands of likes from the social media application application’s users.

The celebrity couple exchanged rings in July 2020 before getting married in the same year. They were blessed with daughter Alyana Falak in October in 2021.

Earlier, the actor opened up about their marriage in an interview to a foreign news agency.

She called it a “typical marriage” set up by her parents just like in normal houses, adding they had no relationship and had not even met a lot of times.

“There was no relationship, we hadn’t even met a lot of times,” the celebrity said. She said he proposed to her in front of her sisters. She told him she did not want and ignored it.

Falak Shabir resorted to the traditional way and ended up asking her father for her hand in marriage!

“He talked to my father, and then whatever happened was decided by him and who can make a better decision for you than your parents? And he proved that too!” she gushed.