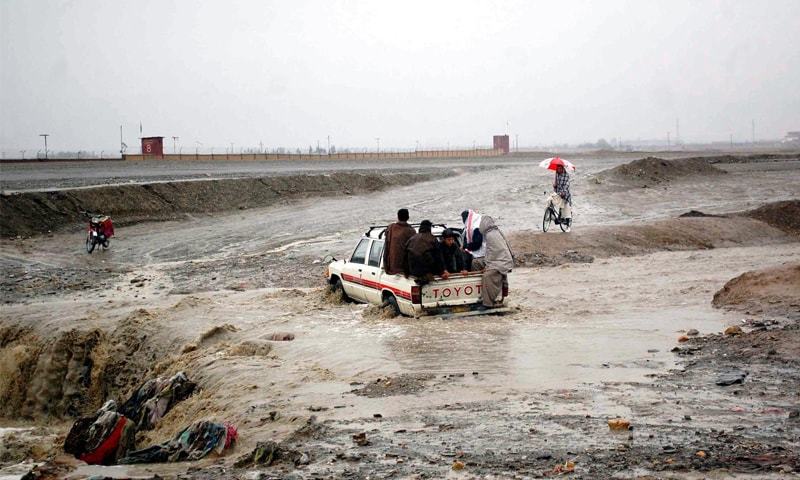 Flash floods in Qila Abdullah and other places have submerged dozens of villages and killed as many as six people last night, as a result of the strong rainy period that has once again inflicted havoc in Balochistan.

The province of Balochistan, which was already in dire need of relief after the last period of severe rain and flooding, is once more exposed to the wrath of a natural disaster.

The NDMA reports that 182 people have died in the province as a result of the rain, and numerous villages have been inundated.

In Qila Abdullah, three dams have been demolished along with numerous connection roads. Due to the localized flooding, the railway service between Chaman and Quetta has also been impacted. Numerous cattle heads have died, and farms and orchards have been destroyed.

The traffic between Quetta and Karachi was also suspended as the linking highway had been damaged in different areas of Lasbela district.

According to Commissioner Kalat Division Dawood Khilji, the recently established alternate route at Landa area of Uthal on National Highway was washed away by flood on Friday.

He appealed to the public to avoid traveling on the Quetta-Karachi highway.

The PDMA rescue teams are present in the area and are providing rescue services to people stranded in the flood-hit areas.

PDMA DG Faisal Panezi said that so far 1,000 people were rescued who were trapped in far-off villages and they were shifted to safer places. He said two people died and two went missing in Qila Abdullah.

He informed that along with the PDMA, Pak Army, FC and district administration were providing rescue services. He said that food supplies and tents for 500 families had also been provided.

Balochistan Chief Minister Abdul Qadoos Bizenjo expressed his grave concern over massive damage to Qila Abdullah, Chaman, Lasbela and Muslim Bagh due to heavy rains. He contacted the public representatives and district administration officials of the flood-ravaged areas directing them to visit the affected areas and provide all possible help to the affectees.

In a statement, the chief minister directed the immediate rescue of the people trapped in flood water.

He also said that the communication links in flood-affected areas should be restored on a priority basis.

Traffic between Khyber Pakhtunkhwa and Gilgit-Baltistan was suspended for the second time this month as a temporary steel bridge installed at the Karakoram Highway (KKH) was swept away by flash flood in the Ichar nullah area of Upper Kohistan on Friday.

The fourth rainy spell is still going strong in Karachi as well.

Heavy rains flooded the streets of several districts of the city, including Malir, University Road, Super Highway, Gulzar Hijri, and its surrounding regions. Due to the flooding of the city streets, the flow of traffic was severely hampered.

On Friday, the Met department predicted that various areas of Sindh would experience thunderstorms over the next two days, along with a few instances of “heavy” to “very heavy” rainfall and sporadic strong gusts.