Akshay sir and I have a unique tuning: Bhumi

* Taking to her Instagram handle, the 'Dum Laga Ke Haisha' actress dropped animated posters of her films as it's been exactly five years to this day since the release of 'Toilet' 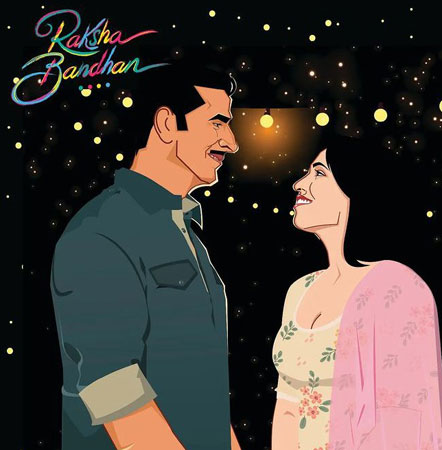 Actor Bhumi Pednekar shared a series of pictures as it is a coincidence that her film ‘Raksha Bandhan’ was released on the same day as ‘Toilet: Ek Prem Katha’.

Incidentally, she has paired opposite Akshay Kumar in both films. Taking to her Instagram handle, the ‘Dum Laga Ke Haisha’ actor dropped animated posters of her films as it’s been exactly five years to this day since the release of Akshay and Bhumi -starrer ‘Toilet: Ek Prem Katha’.

Sharing the pictures, Bhumi captioned the post, “Rakshabandhan releases on the same day ToiletEkPremKatha released 5 years ago. Can not wait to bring back our jodi on big screens. Super excited.”

Aanand L Ra`s directorial `Raksha Bandhan` which hit the theatres today has been written by Himanshu Sharma and Kanika Dhillon. The film is produced by Colour Yellow Productions, Zee Studios, and Alka Hiranandani in association with Cape Of Good Films. Apart from Akshay and Bhumi, `Raksha Bandhan` also stars Sahejmeen Kaur, Deepika Khanna, Sadia Khateeb and Smrithi Srikanth, who will be seen as Khiladi Kumar`s sisters.

In an interview, Bhumi said, “It is such a lovely coincidence that on the 5th anniversary of ‘Toilet: Ek Prem Katha’, ‘Rakshabandhan’ – my second movie with Akshay sir is releasing in theatres today! Akshay sir has been a huge part of my career and there is so much I have learnt from him. Akshay sir has always backed me to deliver on screen and I`m grateful for his trust and vision for me as an artiste.”

“‘Toilet : Ek Prem Katha’ was the first blockbuster of my career, thanks to Akshay sir and I hope we deliver a solid hit again with ‘Rakshabandhan’. Akshay sir and I have a unique tuning to deliver some meaningful entertainers. Both ‘Toilet’ and ‘Rakshabandhan’ deliver a message that one can take home and also watch such films with the entire family. I love family entertainers because it appeals to the widest possible quadrant of movie-watchers in India,” she added.

Bhumi is confident that Rakshabandhan will strike a chord with every Indian living worldwide. “I hope Rakshabandhan touches the heart and soul of everyone because it has been made with so much purity and love by Aanand L. Rai. He has been instrumental in shaping me as an actor that I`m today. He has always pushed me to deliver more on screen and I hope people love what I have done in Rakshabandhan. I can`t wait for everyone to see it. I really hope our collaboration and all the hard work is appreciated by the audiences worldwide.”