‘Rocketry: The Nambi Effect’ gets screened at India’s parliament 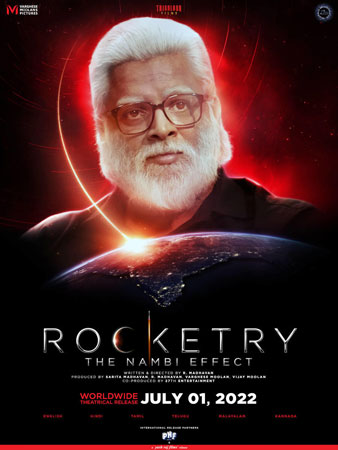 Actor-director R. Madhavan’s recent movie `Rocketry: The Nambi Effect,” has garnered a laudatory review as the film was screened in Parliament. The biographical drama was screened in Parliament on August 5, and it received quite a phenomenal response. The director and actor of the film Madhavan, while talking about it, said, “It was quite a humbling experience. I was proud and nervous at the same time. You have to realise this isn’t a common occurrence and I still cannot believe it happened. And of course, I am eternally grateful that the film was so well received.”

`Rocketry: The Nambi Effect` is a 2022 Indian biographical drama film written, produced, and directed by R. Madhavan in his directorial debut. The film is based on the life of Nambi Narayanan, played by Madhavan, a scientist at the Indian Space Research Organisation. For the unversed, `Rocketry: The Nambi Effect` was released on June 1. The film features Madhavan in the lead role of scientist Nambi Narayanan. The movie was shot in India, France, Canada, Georgia, and Serbia. Shah Rukh Khan and Suriya played cameos in the film. Speaking about the superstars’ cameos, Madhavan revealed that they did not charge a single penny. “The two did not charge a single penny for their work in the film. They did not charge anything for caravans, costumes and assistants. In fact, Suriya flew out to shoot in Mumbai with his crew on his own money. He did not charge for the flights or for the dialogue writer who translated his lines into Tamil. There are a lot of good people in the industry. I am an outsider, and I have met several people in my career who wholeheartedly helped me. Just on my request, Amit ji or Priyanka Chopra post a tweet. I am grateful for their love and respect, “Madhavan had shared.