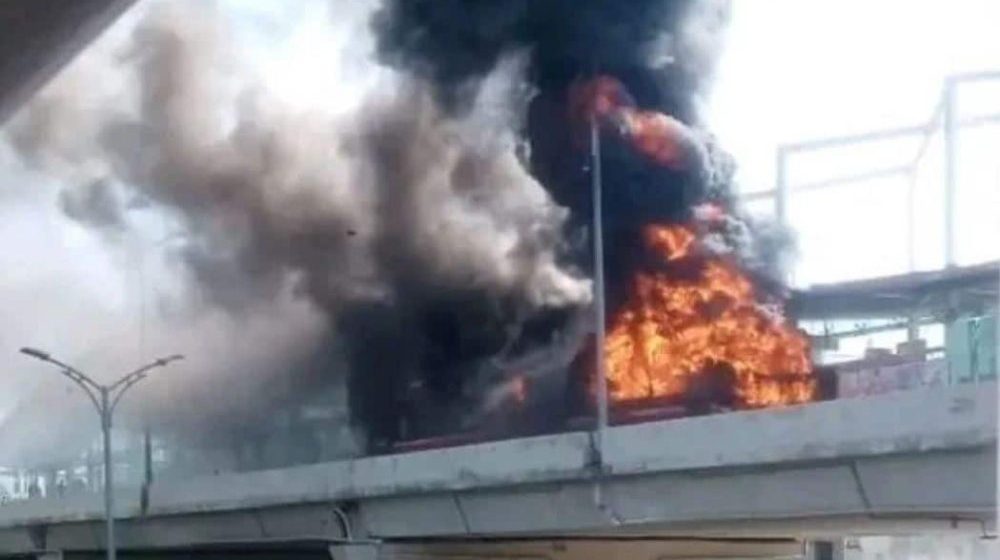 Smoke could be seen billowing out from the back of the bus, with parts falling to the ground.

The bus engulf fire as a consequence of a fire that started in the engine, the service management claims, adding that no one was hurt but the bus completely burnt.

The fire incident took place at the Murree Road Rehmanabad metro station in Rawalpindi, according to the emergency personnel.

Furthermore, the administration mentioned that they were trying to figure out other causes behind the fire.

Earlier, in a similar incident, a metro bus caught fire at Jinnah Avenue in Islamabad on Monday.

The passengers were safely rescued with no casualties as the driver stopped the bus just in time and opened the doors, letting the passengers exit the bus. The fire brigade also reached the scene in order to control the flames.

In addition, the Metro Bus Authority says that the situation is under control and the passengers were rescued safely.

The authority further added that they had sent a report to the government of Punjab, seeking funds for maintenance works of the buses and metro tracks.

The bus service will run from Bahara Kahu to PIMS (Green Line), Koral to PIMS (Blue Line) where all the Green Blue services will merge with Red Line (Rawalpindi Islamabad Metro).

From the Faiz Ahmad Faiz bus stop, the passengers can take Orange Line to Airport. The prime minister also laid the foundation stone of a Command and Control Centre for metro buses at Bhara Kahu, which will be completed in six months.