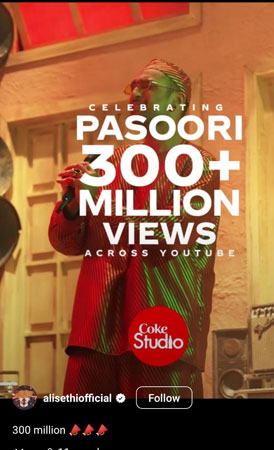 Singer Ali Sethi took to his Instagram to share video clips from the chartbuster song along with the caption,”300 million.” ‘Pasoori’ generated quickly climbed up to third spot in Spotify’s global chart. It was recently featured in Ms Marvel as well. ‘Pasoori’ was an international hit. Indian celebrities expressed their love for the song. Alia Bhatt in a recent interview revealed that Pasoori is her favourite Pakistani song. Indian actor Manasi Parekh said that It’s the greatest song to be made in the last one year.

Indian choreographer of viral songs ‘Dil Dooba’ and ‘Lamborghini’, Shazeb Sheikh, could not avoid praising this masterpiece in the comments. Director Mira Nair and Indian playback singer Harshdeep Kaur also dropped down in the comments section to say how great the song is. BhargavicPillai, the voice behind ‘Pappu can’t dance Saala’ dropped a heart in the comments section to show her love for the song. ‘Pasoori’ has been written by Sethi and Fazal Abbas, while the composition has been done by Sethi and Zulfiqar J Khan, popularly known as Xulfi. The music has been produced by Abdullah Siddiqui and Xulfi.