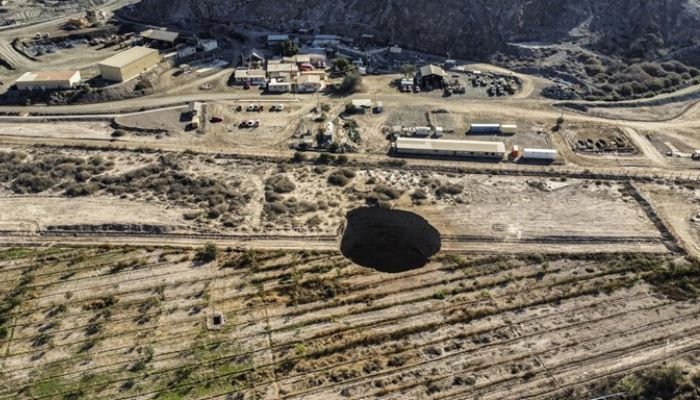 Emergence of an enormous sinkhole in Chile, reported as being larger than a tennis court, appeared in the vicinity of the Atacama Desert in close range to a copper mine.

Specialists were sent onto the scene to investigate the hole which spanned some 32 metres which makes approximately 104 feet across and goes as much deep into the ground. The sudden emergence of the sinkhole came about in somewhat 800 kilometres, which makes merely 500 miles, north of Santiago over this past weekend.

Candian firm Lundin Mining is in charge of operating Alcaparrosa mine where a 100-meter security perimeter has been set up around the hole in the district of Tierra Amarilla.

The company has stated that no asset has been harmed, whether they be tools and equipment, employees or their infrastructure and there seems to be no change in the size of the sinkhole since its detection.

In accordance to this, the company has issued a pause in all work in the area of Alcaparossa mine. While the director of Sernageomin (National Service of Geology and Mining), David Montenegro has stated that specialists would be looking into the cause of this sudden collapse and all preventive measures to ensure safety of the general public is being taken.

The mayor of Tierra Amarilla, Cristian Zuniga, has given a statement which called to say that the occurring event was unparalleled in the district’s history, which is home to somewhat 13,000 residents.

The mayor has also called to investigate into the fact whether the sinkhole is a result of the copper mining that was taking place in the area or any other underlying geological factors that could have led to its appearance.

The world’s largest copper supply comes from Chile alone, which takes up quarter of the global supply.