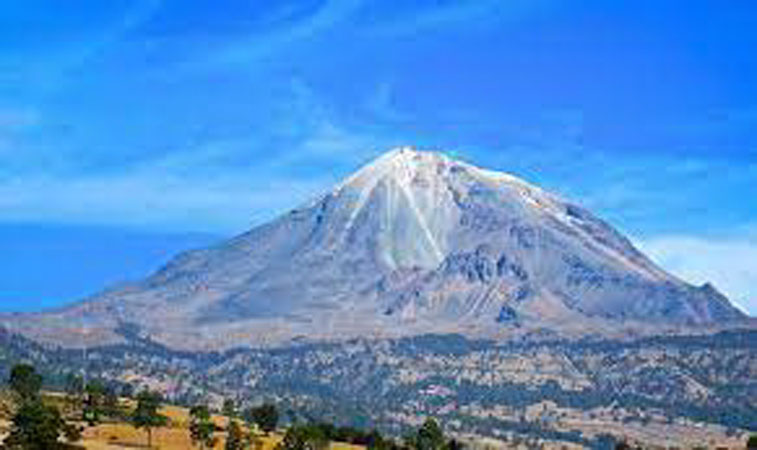 A former journalist who had no climbing experience has revealed how Cheryl Cole inspired her to conquer the seven highest volcanoes on each of the continents.

Recalling the chain of events, she said: ‘Cheryl Cole actually inspired me to start climbing, and oddly enough this had nothing to do with her music! A few months after [my] dad passed away, from oesophageal cancer at the age of 64, I was existing in a kind of dark cloud of grief.

‘I had just turned 30 when Dad passed and was finding it hard to cope. One day, I happened to leaf through Hello magazine. There was a feature on Cheryl Cole’s climb of Mount Kilimanjaro to raise money for Comic Relief.

‘I found myself drawn to a photo of her on the mountain, with a glowing orange-red sunrise behind her, and read about how painful yet inspiring the climb was for her. A little voice in my head said, “Maybe you could do that too.” I needed to do something big, something difficult, to get me out of my sadness and do something positive.

Cairns, who previously worked as a journalist in Hong Kong, Shanghai and Paris, continued: ‘My father loved hill walking, and on the fifth anniversary of his passing I embarked on the seven volcanoes project in his memory.’

When she revealed her grand plan to friends and family, Cairns said people thought she had ‘gone nuts’.

She recalled: ‘My mother was particularly worried due to my asthma [which I suffered with since a child], but when she saw I was determined to do the climbs she was 100 per cent supportive.

‘Several times when I messaged her from some windy isolated mountainside to say I was exhausted and homesick, she would message back: “I know it’s hard but you can do this. I’m thinking of you and sending you all my love.”‘

After plotting her around-the-world adventure, Cairns realised she had to get into shape as she had ‘virtually no’ experience with hiking and climbing.

In a bid to achieve her goal, Cairns went about crafting a vigorous training routine that she said she took ‘very seriously’.

‘A few times I couldn’t get away, so I decided to climb up the spiral staircase in Russell Square Tube station about 30 times, again carrying the heavy backpack. Each time I’d climb it while dodging tourists coming the other way, then take the lift up and start all over again. I got a few strange stares!

‘Russell Square Tube station has the longest staircase, and I managed to work out exactly how many steps were equal to a typical daily altitude gain on the mountain expeditions.’

In terms of her diet, Cairns also upped her calorie intake and ‘ate a lot to gain muscle and fat’.

Explaining why bulking up was important ahead of her expedition, she said: ‘In Antarctica, the [cold] temperatures mean you can easily burn 5,000 to 6,000 calories a day on a mountain expedition there. I managed to gain five kilos – quite a lot when you consider that I only weighed about 53kgs to start with!’

After completing the necessary training, Cairns packed her bags and set off to complete her challenge of a lifetime, having gathered the necessary funding through sponsors and squirrelling away money earned working three part-time jobs.

Asked what the most challenging part of the entire experience was, she replied: ‘A major challenge is naturally physical – you’re dealing with massive altitude gains which take days or weeks to acclimatise to, sometimes vicious weather, and the possibility of exhaustion.

‘But an even bigger challenge was keeping my nerve and persevering despite everything.’

To make matters worse, Cairns had to battle altitude and physical exhaustion while monitoring her chronic asthma.

The adventurer admitted: ‘It’s not easy when you’re above five, six thousand metres [16,400ft/19,685ft] and the oxygen seems to have disappeared, and your lungs feel half their usual size.’

Along with physical challenges, Cairns also had extreme weather to contend with as she reached dizzying heights She said: ‘In Antarctica, the average temperature at Union Glacier Camp was a steady minus 20 degrees Celsius. It didn’t actually feel too bad, given it was a “dry” cold. However, it gets a lot colder with wind chill and higher altitude. Looking back, Cairns said she thinks her dad would ‘be proud’ of her achievement. She has also raised around £15,000 for Cancer Research UK through her endeavours.

Now based in the Scottish Highlands ‘surrounded by gorgeous munros’, she concludes: ‘I’ve been happily walking up a few local hills near Fort William. I love living in the Highlands of Scotland – it’s a climber’s paradise. ‘I was [also] lucky enough to marry a man who ran up and down hills in his childhood and knows a lot of good local trails.