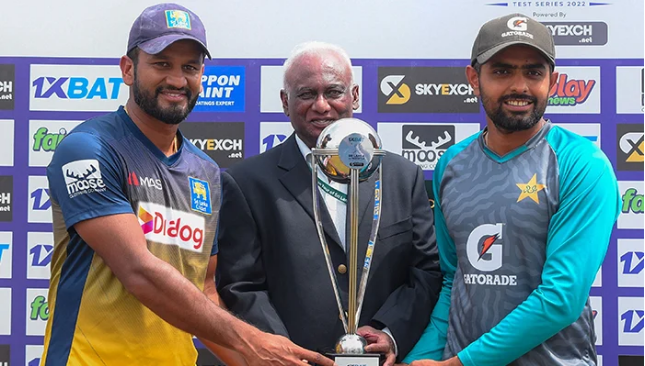 GALLR: Sri Lanka bounced back from an opening defeat to thrash Pakistan in the second Test by 246 runs and end the series level at 1-1 on Thursday.

Skipper Babar Azam extended his prolific run of form to almost single-handedly drive the tourists in the two-match series.

Azam’s knocks of 119 and 55 powered the team to an opening win after they chased down a Galle record of 342.

He hit 81 in Pakistan’s mammoth chase of 508 in the second Test but it was a lone fight against an inspired Sri Lankan spin attack.

The 27-year-old star batsman has averaged over 63 in the last 12 months and is third in the Test batting rankings, behind Joe Root and Marnus Labuschagne.

He is number one in ODI and T20 rankings.

Azam was far from the only star among the tourists, with opener Abdullah Shafique making it a series to remember after his match-winning 160 not out in the first Test.

Shafique, 22, batted with patience and commitment as the tourists chased down the Galle record target and Azam said the batsman is headed for the top.

Bowler Naseem Shah, 19, meanwhile rattled the Sri Lankan batsmen with his express to claim a match haul of five wickets in the second Test and add to Pakistan’s steady stream of fast-bowling talent, led by Shaheen Shah Afridi.

Galle hosted Australia and then Pakistan in four back-to-back Tests but the venue gave radically different pitches in each contest — much to the surprise of the teams.

Sri Lanka lost their Australia opener on a vicious turner but then bounced back to beat the tourists on a pitch that turned on day four.

In the second match, Pakistan seemed confident of chasing down 508 before their batting collapsed, but Azam said there were “no demons” on the pitch.

Sri Lanka has a new spin king in Prabath Jayasuriya, who took his fourth five-wicket haul in just his third Test.

The 30-year-old bamboozled the Pakistan batsmen with his left-arm spin to claim 17 wickets in the series, also getting out Azam three times.

Jayasuriya has 29 wickets in three Tests since making his debut against Australia this month but credited bowling partnerships for the haul, after able assistance from Ramesh Mendis.

The former captain struck 76 and an unbeaten 94 in the lost-cause first Test, but his 80 in Sri Lanka’s first innings set up their dominance and Thursday’s win.

Chandimal, 32, has remained cool and calm despite being in and out of the Sri Lanka team after being ousted as captain in 2017.

He hit his maiden double century — 206 not out — in the recent series against Australia and said support from friends and family had made him “mentally strong”.