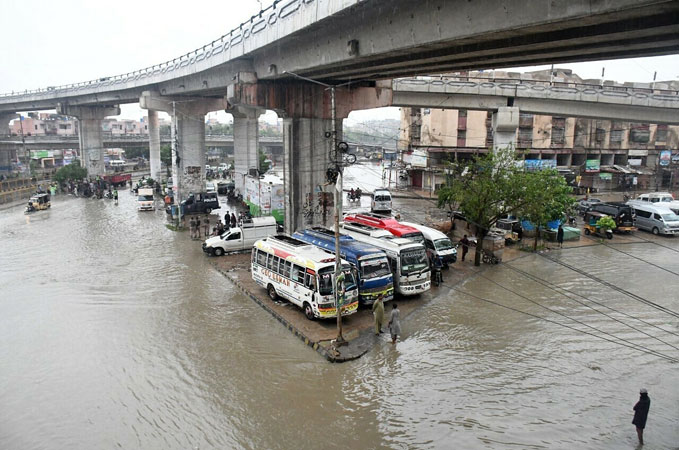 Heavy monsoon showers and strong winds have wreaked havoc across the country with 14 casualties reported within a span of 24 hours on Monday as images and videos of raging flood waters in urban and non-urban areas alike going viral, a private TV channel reported. Authorities also confirmed that as many as 27 people were injured in rain-related incidents all over the country.

In Faisalabad, four people, including two tourists, lost their lives when the roofs of two buildings, a private hotel and a house, collapsed due to heavy rains. A nine-year-old boy was electrocuted in Rehman Town.

Rescue officials told a private TV channel that around 17 people were injured in separate roof and wall collapse incidents in the district. Faisalabad Rescue 1122 District Emergency Officer (DEO) Ehtesham Wahla claimed the incidents took place due to the negligence of the public. “They did not repair the vulnerable buildings in time which resulted in catastrophe,” he added. Meanwhile, the Faisalabad building control authority sprang into action to mark dangerous structures before their collapse could claim more lives.

In Lahore, a person was killed and three others were wounded from debris when a mud roof in Daroghawala caved in, according to Rescue 1122 officials. The survivors were pulled out from the rubble sent to the hospital for medical treatment. A further five people were wounded in Lodhran, located on the northern side of Sutlej River, when the roof of a house collapsed on top of them.

On the other hand, the Rawalpindi district administration has issued a warning to the public to protect themselves from the floodwaters accumulating in Nullah Leh. The water rose up to 16 feet in the tributary, submerging several areas located along the massive storm drain. Water spilling from Nullah Leh gushed into the Benazir Bhutto Shaheed Hospital and the area near Naz Cinema. Raging streams of flood waters were also seen in Bohar Bazaar and Mochi Bazaar.

In Sindh, a 21-year-old drowned in the Lyari River on Monday while another man was buried under a landslide in Karachi. The father of the 21-year-old man said that his son Amir was standing by the riverbank when he lost his footing and slipped into the turbulent river near Sohrab Goth. He reached out to the rescue services but no one came in time to help. As a result, his son lost his life.

Separately, Rescue 1122 managed to save the life of a septuagenarian.

Eyewitnesses said a 70-year-old was trapped in the Korangi River for several hours before being rescued by authorities.

Meanwhile, in the Qasbah colony, a landslide resulted in the death of a person. A house located near the Mughal Kantey Colony was destroyed in the incident. Thundershowers were equally hostile towards other areas in Sindh.

Crops in Tando Allah Yar, Jacobabad, Bhit Shah, Hala and Matiari were damaged by the severe weather. A roof collapse incident was also reported in Hyderabad, which luckily did not cause any casualties. Authorities have confirmed that at least two women drowned in raging rainwaters at a village in Islamkot.

According to the Khuzdar Levies Force, two siblings were killed when the roof of the house they were in collapsed in Orinji. Another two people were killed and two others were injured when a motorcycle rammed into a car near Samban on National Highway owing to the rains. Those injured were admitted to Khuzdar Teaching Hospital for medical assistance.

Sher Qilla, located in the Ghizer district of Gilgit Baltistan, has been flooded after the recent monsoon spell. Rescue efforts are underway have been affected because the Gilgit-Chitral highway has been blocked at several points due to landslides. Landslides caused by incessant showers have disrupted road connectivity in several areas.