‘Crimes of the Future’ — a horrifying twist to a possible future 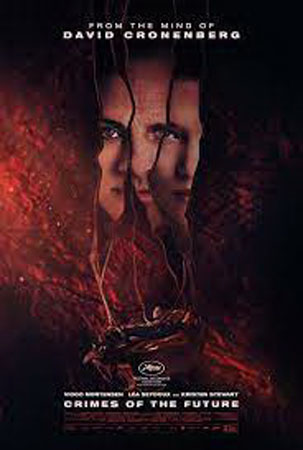 Have you ever considered that in the far future, rather than competing for our exterior beauty, we would be an oriented beauty pageant that focuses on our inner beauty or our inner bodily parts, such as our lungs, liver, and other organs, and tattoo them? Or consider the possibility of our evolved generation ingesting plastics and plastic-made products, as well as a generation that would require a chair for their digestive system. With hints of Crash (1996) Crimes of the Future (2022) is set in a distant future where bodily mutilation and modification are the new norm. After 23 years since his last film, eXistenZ(1999), the king of grotesque and the baron of blood, David Cronenberg returns to his favourite genre he is also one of the leading figures of what is popularly regarded as the body horror genre, addressing visceral bodily alteration, infection, and the entwining of the psychological, physical, and technological aspects in his movies. The film bears the same title as his 1970 sci-fi tale about a world without reproductive women, although there is no correlation between the two. Crimes of the Future is set in a future, in which advances in science and mutations in human genetics have all but eradicated physical pain and infectious illness, and where environmental disasters and climate change have wreaked havoc on the world. Brecken, an eight-year-old child, has the intrinsic capacity to absorb and digest plastics as food. Brecken’s mother, convinced that he is monstrous, strangles him with a pillow, leaving his corpse to be discovered by her ex-husband Lang. Saul Tenser (Viggo Mortensen), a man who grows new organs inside of his body as part of “Accelerated Evolution Syndrome” though has digestion problem, and her partner Caprice (Lea Seydoux) who observe and tattoo his organs are world renowned performance artists of body phantasmagoria. Together they exploit Tenser’s syndrome, whose body regularly produces new vestigial organs in order to surgically remove them in front of the audience. Later Tenser and Caprice meet with officials from the National Organ Registry, a government agency tasked with upholding the state’s constraints on human development by recording and keeping newly developed organs. Tenser’s aesthetic aims capture one of the bureaucrats, Timlin (Kristen Stewart). The universe created by Cronenberg is exotic in depth. There are many unbelievable horrific scenes in this film, such as a man with digestive problems sitting on a chair; arousing from a body cut; the evolutionist who wants to modify the digestive system so that everyone can eat the plastic, especially their “purple candy bar” made from toxic waste, fatally deleterious to others, and finally the autopsy and public display of Brecken. This might be the director’s most profound exposition of recurring themes. The Crimes of the Future have plenty of dialogue and ponderous scripts. The scenario resembles one of his most fully realized universes, one imbued with caustic humor that borders on the bizarre and one that, as usual, gives an uncannily prescient take on humanity’s not-too-distant future. The production design for Crimes of the Future is as meticulous and gruesome as one would expect from a Cronenberg film. Tenser’s sophisticated contraptions, whether at home – like his bed or chair – and in his performances with Caprice, where they employ a top-of-the-line mechanical autopsy table, are particularly notable. Before watching it, you must take a tour of this genius’s other movies, in which he prognosticates the impalpable future in the bleakest way with a pessimistic approach, for he knows that humans’ morass pride in excessive technology and intelligence, neglecting environmental disasters, climate change, and contaminating the air, will lead them to their downfall. His films foretell the future in the most horrifying and terrible ways: The Fly (1986) was about human metamorphism into a fly; eXistenZ (1999) was about the future of gaming where players can’t tell the difference between real life and virtual reality; Video drome(1983) was about mind control, hallucination, and conspiracy; and Rabid (1977)was about diseases spreading and turning people into zombies. You cannot grasp or fathom the atmosphere of Crimes of the Future until you have seen his summum bonum.

The writer is a film critic and can be reached at saqlainali878@gmail.com