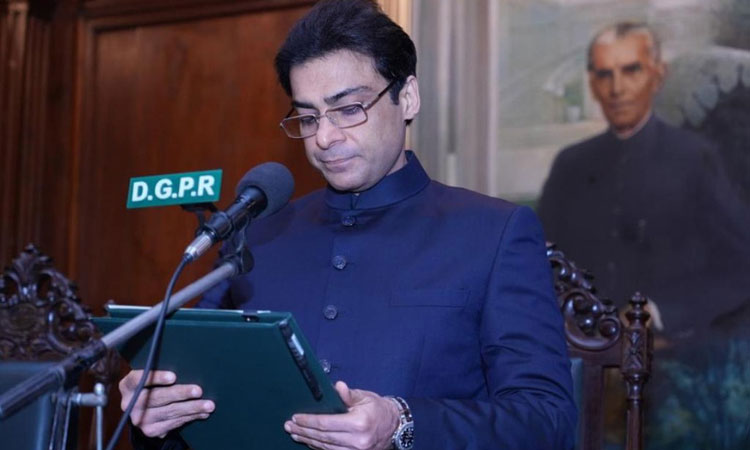 Following his three-vote win against Chaudhry Pervaiz Elahi – the joint candidate of PML-Q and PTI – PML-N leader Hamza Shahbaz Saturday took oath as the Punjab chief minister. Governor Punjab Baligh Ur Rehman administered the oath to Hamza in an oath-taking ceremony that took place at the Governor House. PML-N leaders and other government officials were in attendance. After coming into office, Hamza thanked Allah, the PML-N, coalition parties, particularly naming Asif Ali Zardari and Chaudhry Shujaat Hussain, both of whom he said played a “central role” in “strengthening democracy in the country”. “InshaAllah we will continue our mission of serving the people,” he said, says a news report. Hamza Shahbaz, a day prior, retained the post of the Punjab chief minister as Deputy Speaker Dost Mazari, citing Article 63A of the Constitution, rejected 10 votes cast by PML-Q members. As a result, Hamza received 179 votes, while Elahi, who was backed by the PTI, managed to bag 176 votes. Hamza was clad in a black sherwani. In the television footage of the ceremony, slogans of “Aik Zardari Sab Pe Bhaari” (one Zardari outweighs them all) were heard immediately after Hamza took the oath. This is the second time that Hamza beat Elahi in the contest for the Punjab CM.

The last time he had secured victory on April 16, his oath-taking had been delayed for days with then-governor, Omer Sarfraz Cheema, refusing to administer the oath to him. Eventually, National Assembly Speaker Raja Pervaiz Ashraf administered the oath to him on April 30, following the Lahore High Court’s directives. The run-off election for the province’s top office was held on Friday, in line with the Supreme Court’s directives. The session, which began hours after its scheduled time, saw Hamza being re-elected as the chief minister of Punjab by three votes after Deputy Speaker Mazari rejected all 10 votes cast by the PML-Q on the pretext that they had violated the orders of their party chief.