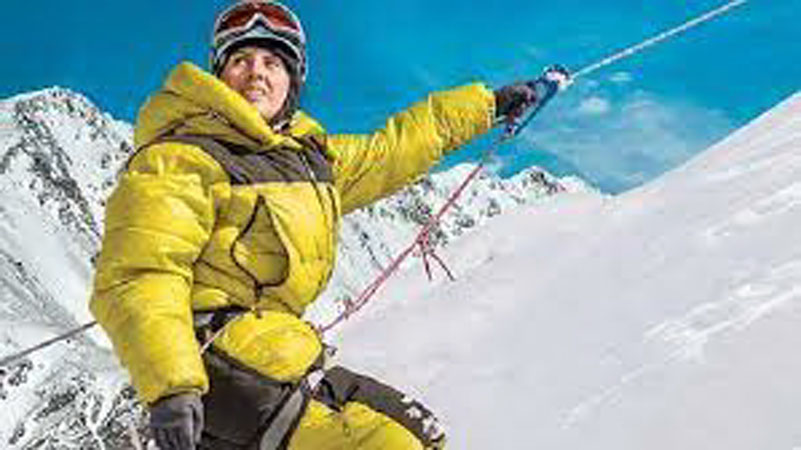 LAHORE: Star mountaineer Samina Khayal Baig has become the first Pakistan woman to summit K2, the world’s second highest mountain. The 31-year-old reached the top of the 8,611-metre (28,251-foot) peak early Friday as part of a seven-member local team, and was followed hours later by a second Pakistan woman, Dubai-based Naila Kiani. Several other climbers from various countries, including female climbers from Oman, Lebanon, Iran, and Taiwan, also summited the peak on Friday morning. Pakistan is home to five of the world’s 14 mountains higher than 8,000 metres, and climbing them all is considered the ultimate achievement of any mountaineer: world’s second highest peak K2 also known as “savage mountain”, the Himalayas with the killer peak of Nanga Parbat (8,126 metres) and the Hindu Kush with Trich Mir (7,708 metres). Besides being far more technically difficult to climb than Mount Everest, K2 has notoriously fickle weather, and has only been scaled by 425 people since 1954 — including around 20 women. More than 6,000 people have climbed Everest since Edmund Hillary and Tenzing Norgay first reached the top in 1953 — some of them multiple times.

In 2013 Samina became the first Pakistan woman to climb Everest and then all Seven Summits in seven continents by 2014. She also has the distinction of being the first and youngest Muslim woman to climb Mount Everest, having done so at the age of 21. When she brought honour to her village and became the youngest Muslim woman to climb Everest, her achievement had a wonderful domino effect. Since then she has encouraged many more girls to take up climbing and other sports — an unusual pursuit for women in socially conservative Pakistan. Pakistan has excellent climbers but few take it up as a professional sport. There is no patronage for this sport in Pakistan, either at the Government level or from private organisations. Samina was the first to climb the peak ChashkinSar (above 6,000 meters) in Pakistan in 2010, which was later renamed Samina Peak after her. She reached the summit of Koh-i-Brobar (Mount Equality) in 2011. An attempt at the seven kilometer high Spantik Peak ended in failure for Samina, due to adverse weather conditions.

Samina comes from Shimshal village in Hunza Gojal, Gilgit-Baltistan, Pakistan, and was trained in mountaineering from the age of 15 by her brother, Mirza Ali. As a student of Arts, she began climbing when she was merely four years old. Besides the Himalayas, Samina has been employed as a mountain guide and expedition leader in the Hindu Kush and the peaks of Karakoram. She has been a professional climber since 2009. By the time she turned 23, she had climbed the highest mountain on each of the world’s seven continents, along with his brother Mirza Ali. 1: Mount McKinley — (Denali) 6190m in North America, 2: Mount Elbrus — 5642m in Russia and Europe, 3: Carstensz Pyramid — Puncak Jaya 4,884m in Indonesia, 4: Mount Everest — 8848m in Himalayas Region, 5: Mount Kilimanjaro — 5895m in Tanzania, 6: Mount Vinson — 4892m in Antarctica and 7: Mount Aconcagua — 6,961m in Argentina.

In February 2018, Samina was appointed the National Goodwill Ambassador for Pakistan by the United Nations Development Programme (UNDP). UNDP’s National Goodwill Ambassadors are inspirational women and men who serve as spokespersons to uphold the United Nations Charter and the Sustainable Development Goals. The task given to Samina was to lead efforts to build national awareness and partnerships around the Sustainable Development Goals, particularly those related to climate change, environmental protection, youth and women’s empowerment. Awarded Pride of Performance by the Government of Pakistan, today she presides over the Pakistan Youth Outreach Foundation to encourage youth, especially women, to participate in outdoor activities. As a mountaineer, she bears witness to the critical importance of preserving Pakistan’s fragile ecosystems and preparing for the effects of climate change.