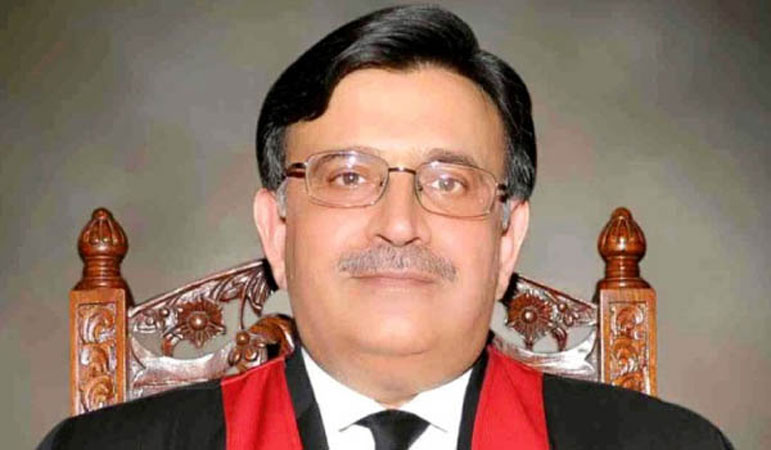 Chief Justice of Pakistan (CJP) Justice Umar Ata Bandial Tuesday opined that the matter of revisiting the National Accountability Bureau’s (NAB) law will be returned to the Parliament, as there was no alternative to the forum. “In my opinion, this matter will be referred back to Parliament. There is no substitute to Parliament […] and we cannot take away its powers,” the CJP said while hearing PTI’s plea challenging the amendments made to the NAB law. A three-member Supreme Court bench – comprising CJP Bandial, Justice Mansoor Ali Shah, and Justice Ijazul Ahsan – heard the petition filed by PTI Chairman Imran Khan. PTI Chairman Imran Khan had petitioned the apex court under Article 184 (3) of the Constitution, claiming that the bill had “virtually eliminate[d] any white-collar crime committed by a public office holder”. The parliament’s joint session last month passed the National Accountability (Amendment) Bill, 2022, which curtailed the anti-graft watchdog’s authority and reduced remand days among other amendments. However, the PTI, whose lawmakers had resigned en masse from the National Assembly, were not present to oppose the changes and later opted to challenge the amendments in the top court. The SC, after hearing the arguments of PTI lawyer Khawaja Harris and former foreign minister Shah Mahmood Qureshi, adjourned the hearing till July 29 (Friday) 11am The court also issued notices to NAB, the federal government, and the attorney-general to present their side of the story in the next hearing, says a news report.

At the outset of the hearing, Justice Bandial asked whether Law Minister Azam Nazeer Tarar’s claim that ‘all changes made to the NAB law had a supporting reference of SC orders’ was true. In response, PTI’s lawyer Harris said: “I don’t think this is the case. The amendments are in contrast with the Supreme Court’s orders, but they are not in line with them.” Justice Ahsan remarked that several changes were approved “in haste”. Justice Shah asked: “Isn’t it the lawmakers’ job to make law and that the courts have repeatedly asked them to draft NAB laws?”

In response, Harris said: “Through this NAB law, fundamental rights are being violated.” Following Harris’s arguments, Justice Shah asked whether the parliamentarians should not be allowed to use their powers for lawmaking. At this, Harris asked that if the Parliament decides that there should be no punishment for murder, then will they be allowed to do so. Justice Shan responded that if the Parliament abolishes the death sentence as the punishment for murder, then what can the court do about it.

“The sentencing of death is a separate matter. Where corruption and the national treasury are involved, then the matter of fundamental rights becomes involved.” The chief justice then asked people representing PTI that all these matters could have been raised in the Parliament an why did the party not hold a debate over there. “Do you know whether all these issues were taken up in the Parliament or not?” the CJP asked as PTI leader Qureshi approached the rostrum.

The CJP told Qureshi that when the NAB amendments were being passed, then there was no one in the Parliament to oppose them. “When sensitive matters are being discussed, then all lawmakers should be present in the house, where were you?” the CJP asked. Qureshi said that he understands the court’s role. “Answer our questions; because of such cases, the cases of the common man are halted,” the CJP told Qureshi. Justice Ahsan asked: “Why did you not represent 40% of the people in the Parliament?”

“The trust that the people had placed in you as a member of the assembly is not being fulfilled,” remarked Justice Shah. At this, PTI leader Qureshi apprised the court that the NAB amendments had been discussed by the parliamentary committee for several hours. “Probably, you are talking about the committee’s meeting held ahead of the no-trust motion,” Justice Hassan stated. Meanwhile, Justice Mansoor asked, “Why did you walk out of the assembly when you were aware of the importance of the NAB amendments?” Qureshi argued that the treasury benches bulldozed the NAB amendments by majority. Justice Bandial remarked that the matter of NAB amendments had to go back to the legislature as the court cannot use the powers of the Parliament.

“How can the court issue a stay order against the law made by the Parliament?” asked the CJP. Referring to the points raised in the courtroom, the apex court asked why were these points not discussed in Parliament. The court needs more assistance from Qureshi on these points, the top court stated. Justice Mansoor asked if the petitioner deserves the right to file an application against the NAB amendments when it had walked out of the session. Sometimes one has to compromise on personal priorities for the sake of the country and the public interest, CJP Bandial remarked and asked if the PTI has devised a plan to steer the country out of the difficult times. At this, Justice Mansoor stated that the assembly was the forum concerned and by skipping the assembly and moving the court, “how did you become the affected party?”

Replying to the question, Qureshi said that the PML-N had the majority in the assembly, adding that the bill would have been bulldozed even if they opposed it.

The CJP said: “A proposal is hidden in our questions. Deliberate on it for the sake of the people.”

The government has inked a staff-level agreement with the IMF but it is not accepted publically, CJP Bandial said, adding that the value of the rupee is falling day by day.

At this, Harris argued that it was the people’s right that their representatives should not abuse their powers.

Misuse of power is a crime, but it has been made impossible to prove it, the lawyer added. He maintained that the accountability courts could no longer accept information from abroad as evidence. Justice Ahsan said that even money laundering is no longer a crime, adding that it will be a crime when someone accumulates assets through the money. Continuing his arguments, the lawyer said that all the fake account cases would be abolished due to the new amendments to the NAB laws. Meanwhile, the court sought replies from the federal government and the NAB in this regard.