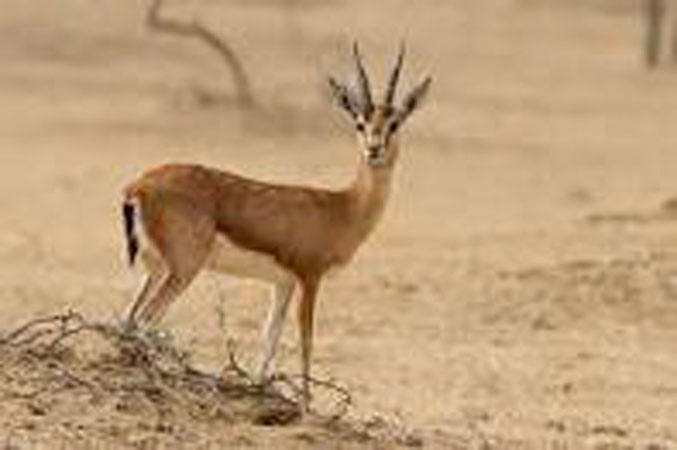 The people of Thar gave a befitting burial to the eight Chonkara deer killed by heartless hunters in Tharparkar.All burial rites were carried out and a prayer leader led a large number of Hindus and Muslims in prayer standing around the eight graves of the innocent animals as if their own family members were to be buried rather than this innocent creature. This is perhaps the first example in human history that the people of Thar have buried the animals with attendance of both Hindus and Muslims. Tharparkar District in eastern part of Sindh province of Pakistan is unique territory in many aspects where humans have strong emotional attachment with natural environment and both wild animals and humans live in complete harmony. The peacock flocks wander in the houses of the Tharis and perch on Choonara (Cone shaped thatched huts in Thar). Deer strut in the premise of the Thari Homes and women suckle the young deer along with their own babies. Residents of Thar defy death and stand and resist the powerful local and outsider hunters who hunt to trap and kill these beautiful wild animals.

A young man Ajeet Singh when spotting the vehicle of hunters who were shooting at herds of poor deer. When the hunters saw this daring boy speeding his jeep towards their vehicle they turned their barrels of guns towards him. The unrelenting young man did not flinch for a second and sped his vehicle and banged it with the vehicle of the hunters. In the meanwhile other people from surrounding areas reached the scene and caught the hunters and handed them over to the police. This valiant retaliation saved the deer from blood thirsty hunters but eight of them were killed and later on buried.

This is not first time that the people of Thar have resisted and offended powerful opposition. During a intermittent visit to Thar, a Thari man shared that a decade back a group of powerful government functionaries had surrounded and trapped some deer. People from surrounding villages after seeing lights and hearing gunshots reached the scene and after finding the deer warned the hunting party to leave. The powerful group of hunter threatened the surrounding mob who they are and asked them to leave or be ready to face horrible consequences but the people did not flee standing their ground ready to die defending the creatures.

In this era when most are afflicted with self interest and everybody looks the other way when natural environment is being pillaged and when officials from concerned government departments who check hunting and poaching and protect wild life of threatened species are facilitating the hunting. The daring acts of the people of Thar seem like a fresh breeze of optimism and euphoria and brings fragrance of a better future.

People of Thar are lovers of nature to their core. They have formed action groups who resist chopping of Gugraal and other species of threatened flora in Thar. They resist the timber mafia’s tree felling spree by embracing and clinging to the trees and thus have saved and protect the natural environment from irreparable damage.

The religious harmony in Thar is also exemplary. Hindus forming majority live with their Muslim brethren eating together. Followers of both faiths participate in Eid , Holi and other celebrations. Homes have no or small compound walls and theft, robbery and other kinds of crimes are unheard in these areas.

This religious harmony plays an important role in protection of natural resources like flora and fauna. Imagine this kind of activity of burying animals and offering prayers is offered at the death of deceased Muslim had happed in any other part of Pakistan. The prayer leader would have refused leading burial rites. The incited mob would have attacked those people attending burial rites and declared the attendant Muslim infidel.

In other parts of Sindh and Pakistan, deforestation and felony is attributed to poverty by apologists. But in Tharparkar, where extreme poverty is more pronounced the majority of the people of Thar prefer hunger and privation over environment protection. Neither have they indulged in crime and beggary. Journalists from Tharparkar also stand side by side with their people against the onslaught on their wild life and natural resources against all odds. One feels optimistic that the exploitation powerful clique, land mafia, timber mafia and hunter mafias would never succeed in their nefarious designs of deforestation ruthless hunting and occupation of natural grazing area called Goucher. The daring sprit of Thar would keep the demography, ecology and religious harmony intact as protection of environment seems engrained in cultural values of Thar.