* Masood Rana was born in Mirpur Khas, Sindh in Pakistan on August 6, 1941 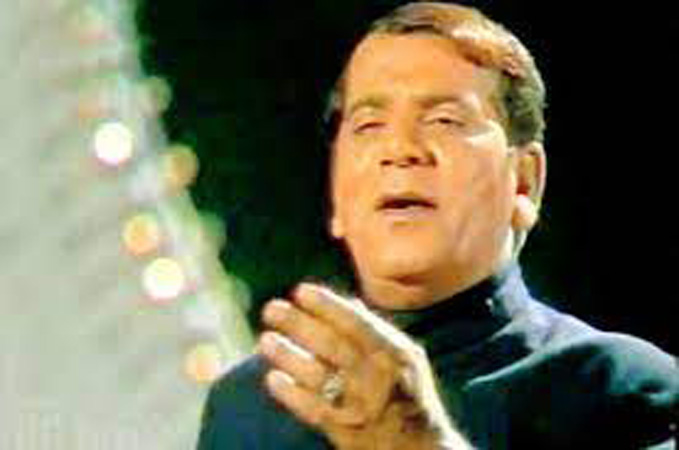 It happens that you do not value a thing or a relation when it is available on your door steps. That was a case with me when I used to come across singer Masood Rana in PTV premises in senior music producer Rafiq Ahmad Warraich’s room. Now that I am hosting my Radio Show ‘Fun Aur Fankar’ on Thursday evenings and my choice this time is to talk about Masood Rana’s film songs. I regret not making best of the times we came across each other in the past. Now after decades when I listen to his songs I realise that this crooner had a wide voice range establishing his versatility as a singer. Before discussing this aspect of Masood Rana’s voice we should talk about his family background and musical journey.

FAMILY BACKGROUND & MUSICAL JOURNEY — Masood Rana was born in Mirpur Khas, Sindh Province in Pakistan on August 6, 1941. His father’s name was Chaudhry Ali Ahmad who hailed from Ludhiana’s agriculture family. Masood Rana was fond of singing right from his childhood. Masood Rana did not go for any formal training in music. Music was inborn in him. In 1955 he started singing from Radio Pakistan. In 1960 he joined a music band along with Nadeem Beg and singer Akhlaq Ahmad.

FILM LINE — character actor Saqi spotted Masood Rana in those days and thought that Masood had all the ingredients in his singing to become a successful film playback voice. Masood Rana bagged two songs in the film Inqilab with music by NJ Rathore. Cast of this movie was Jamila Razzak, Shamim Ara and Habib. The song ‘Mashriq Ki Tareek Fiza Main Naya Savera Phoota’ was a motivational song for this politically motivated film made in support of President Ayub Khan. The Hassan Tariq directed movie ‘Banjaran’ with cast Neelo, Kamal and Azad established Masood Rana as a commercial voice. Masood kept on singing songs for both Urdu and Punjabi films. In 1965 Aslam Irani’s film Daachi brought commercial success for Masood Rana when his song ‘Tange Wala Khair Mangda’ bagged the title of all-time classic in the music of Baba Chishti. Film ‘Mujahid’ brought success for Masood Rana with the Milli Naghma ‘Sathio Mujahido Jaag Utha Hei Sara Waten’. It was composed keeping 1965 war with India in mind. Success came for him in the shape of 20 songs in 1960 and 40 in 1966. Movie ‘Hamrahi’ topped the list which was a copy of Indian film Dosti. Six out of seven songs in Hamrahi were sung by Masood Rana. All songs were popular like ‘Mujhe Chore Kar Akela’. Another motivational song ‘Aei Waten Hum Hain Teri Shama Kei Parwano Main’ in the film ‘Aag Ka Darya’ was a hit composed by Ghulam Nabi Abdul Latif for Muhammad Ali and Shamim Ara film penned by Josh Malihabadi. 1966 film ‘Jaag Utha Insan’ was produced in Karachi with Muhammad Ali, Zeba, Waheed Murad, Firdaus and Ibrahim Nafees. Masood was teamed with Mala for the duet ‘Dil Main Basaya Pyar Sei Hum Nei Tum Ko Apna Jaan Kei’ filmed on Zeba and Waheed Murad. Generally speaking it was a belief that Masood Rana’ songs helped in enhancing the heroes image. Shabab Kiranvi’s film Aaina with Muhammad Ali and Deeba gave hit song ‘Tum Hi Ho Meboob Mere Main Kyun Na Tumhain Pyar Karoon. Music was given by Manzoor Ashraf. 1967 onwards was popular era for Firdaus and Ijaz. One of their successful films was Mirza Jutt with music by Rasheed Attre. Co-stars were Ilyas Kashmiri, Munawar Zareef and Mazhar Shah. Despite many songs sung by other popular singers, Masood-Irene Parveen’s duet ‘Nikke Hundeyan Da Pyar’ superseded other songs in popularity. Till 1973 Masood Rana sang many songs for films like ‘Chand Aur Chandini’ with the song ‘Teri Yaad Aa Gai Din Khushi Main Dhal Gaye’ with music by Kareem Shahabuddin. Cast comprised Nadeem, Shabana and Reshma. The film was directed by Ehtesham who later became father in Law of Nadeem. Then came the film ‘Neend Hamari Khwaab Tumhare’ with Masood Rana’s songs.

VERSATILITY — a song that established Masood Rana’s versatility is ‘Mere Pairan Ch Ghungroo Pawa Dei’ from the film Khushia on which Munawar Zarif danced for his friend Habib like a dancing girl singing/dancing her last song. The second song that I shall quote is the motivational song ‘Sathio Mujahido Jaag Utha Hei Saara Watan’ with Shaukat Ali. The vastness of impact needed a full throat singer’s call to the nation to wake up and get ready to face the enemy’s threat. Both Masood Rana and Shaukat Ali fulfilled this requirement. The third song I shall refer to is the Punjabi song ‘Apana Bana Kei Dil La Kei’ filmed on Habib and Firdaus in a romantic situation. These songs establish Masood Rana’s versatility as singer; romantic, dance motivational songs respectively. Despite the occasional slightly out of tune feeling while touching the high octave notes (sur) what is generally termed as ‘besura’ like in the film Humrahi’s song ‘Mujhe Chore Kar Akela’, senior singer Inayat Abid stated in the second episode of the programme ‘Fun Aur Fankar’ on June 5 that despite this criticism from some circles, Masood Rana kept on getting many melodious tunes from the top music composers of that era. Whereas the song ‘Bhul Jaan Aei Sab Ghum Duniya Dei’ sung by Masood Rana and Madam Nurjehan penned by Khwaja Parvez with music by Nazir Ali was quoted on the other hand in support of Masood’s tuneful songs. Masood Rana kept on bagging songs for leading heroes of that time. For example, his song ‘Jhoom Aei Dil Woh Mera Jan-e-bahar Aei Ga’ was mimed by Waheed Murad for the 1970 film ‘Dil Mera Dharkan Teri’ where Waheed is seen singing for Rani, side heroine. Qateel Shifai wrote beautiful lyrics. Shamim Ara was the heroine. Music by Master Inayat Hussain is termed as one of the reasons for the success of Masood Rana in this song. These songs establish Masood Rana’s versatility; a dancing song, a motivational song and a romantic song.

AWAMI SINGER — Masood Rana sang for the masses. Melody Maker Baba G A Chishti who was famous for making music compositions for masses made popular tailor-made tunes for Masood Rana. Song ‘Tange Waala Khair Mangda’ is one such tune from the 1964 film ‘Daachi’ filmed on Sudhir who plays the role of a Tonga driver. Co-stars were Naghma, Neelo, M Ismail, and Munawar Zarif. Hazin Qadri also wrote a response to this song ‘Tange Waleya Sawaeri Main Vi Tere Haan Di’ rendered by Mala filmed on Neelo while Sudhir drives a Tonga. Another such song is ‘Sajna Nei Boohe Agge Chikh Taan Lai’. It is filmed on romantic hero Akmal of 1960s for heroine Naghma. In all these songs the culture of rural Punjab is shown in the interludes like a rail passing by with the engine whistling, a family gathered around the mother of the house cooking loaves (roti) for her kids, a bride sitting in a doli (sedan) and the groom sitting on a horse bringing his bride home in a procession. In the song ‘Sajna Nei Bue Agge Chick Taan Lai’, the veil in the form of Chikh (blinds) separates the lover from the beloved. In the Lukhnow culture it used to be called ‘Chilman’. Hazin Qadri’s lyrics, Chishti’s music and Masood Rana’s voice gave such gems to Lollywood. In the third episode of the Radio Show ‘Fun Aur Fankar’, the classical vocalist Ustad Fahim Mazhar noted that most of the playback singers in the inception days of Pakistani film industry had a classical music base. Basically what was needed was a voice with strong vocals, a voice that could sing film songs. This need was fulfilled by Masood Rana, Ahmad Rushdi, Saleem Raza and Munir Hussain. Mehdi Hasan came a few years later. Sajid Yazdani, films journalist talked about Madood Rana’s fund raising activities, going free at some friends’ functions. He maintained the value of friendship through these gestures. His companions were Muneer Hussain mostly. Writer Parvez Kaleem disclosed that Masood Rana when asked as to why he kept his eyed closed while singing Masood had said that he looked at touching a true note, a habit that brought him close to tunefulness.