* 'Everything, including the equipment and the infrastructure, has been burned down,' Hasan informed in a telephonic conversation 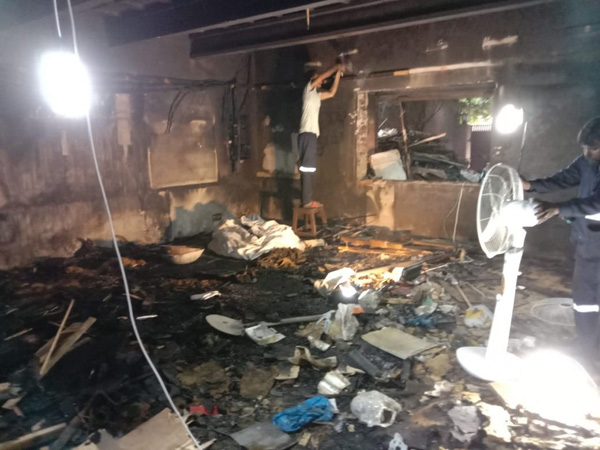 On Tuesday evening, a fire broke out at Mekaal Hasan’s iconic Digital Fidelity Studios in Lahore that led to its wreckage.

An electronic malfunction caused a blaze that reduced everything at Waris Road recording facility to ashes within minutes. No fire extinguishers worked and although the fire brigade arrived at the location within ten minutes, it was still too late to salvage anything, as team members, including Mekaal, ran for their lives.

“Everything, including the equipment and the infrastructure, has been burned down,” Hasan informed in a telephonic conversation. “The damages would roughly cost between 100-200 million rupees.” The state-of-the-art facility was not only an ashram of sorts for musicians but also a studio decked with the latest recording equipment and infrastructure.

Everything inside the control room was burned to the ground, including instruments and air conditioners in other rooms which either melted or got brushed by the fire and smoke. “It’s a tragedy but we can’t do anything about it apart from looking ahead with a new resolve,” said Hasan.

The producer has reached out to all the great names of the music industry who have been associated with the studio to help him rebuild the space. “All the artists that I have recorded, I have reached out to help rebuild the studio. Ranging from Atif Aslam to Rahat Fateh Ali Khan, Noori to Jal, Xulfi to Fawad Khan, I have requested them all to send in donations,” Hasan informed.

“You know this wasn’t just a studio; it was a happy place for musicians. It’s a space that has launched the biggest singers, instrumentalists, and maestros of the country. I am sure all of them will warm up to this task.”

The rebuilding of Mekaal Hasan’s studio space will take place through a formal campaign that will target ex-pats and Pakistanis separately. Mekaal will be opening a GoFundme account for those who are willing to donate from abroad and something easily accessible for the people willing to contribute from Pakistan

The idea is to appeal to the artist community and the people of Pakistan said Hasan. “Every artist has a following and their own set of well-wishers. This space is responsible for some of the most incredible music that has come of out our region and now, it needs your support.”

While the news of the fire spread in the music circles on Tuesday evening, few people know, that like a true rockstar, Mekaal, along with the members of Mekaal Hasan Band went on to play a live show at Ali auditorium, right after confronting this tragedy. “We had to look forward. It was our own show that we were doing for our own fans so we couldn’t cancel it and I am glad we didn’t,” shared Hasan.

Sharing pictures of the studio in shambles on the Guitar Collective Facebook page, a member also informed local musicians about the misfortune, garnering devastated reactions from the artist community.

“Apologies to be the bearer of bad news my friend, mentor and world class musician Mekaal Hasan’s studio shorted-out completely. I have spent a lot of my earlier years in this studio alongside many others,” recalled Hasil Kureshi. “We must reach out to him and help him out in whatever capacity we can as this place has a lot of contribution in the Pakistani music scene. Thank You,” he appealed.

“This is very unfortunate,” commented community head and guitarist Khurram Waqar. “This is devastating,” chimed in Imam Hamdani. Drummer Daud Ramay added, “He needs all the support he can get. This studio has birthed the most resonating and popular records of Pakistan. Not to mention, it has been a home to musicians from all walks of life. This is a sad day for Mekaal and an equally sad day for Pakistan. We must all do our part.”

Established in 1995 as Digital Fidelity Studios, Mekaal’s music facility formed the backbone of the Pakistani music scene in the 90s. Every artist from Lahore, young or old, traditional or non-traditional, has spent a significant amount of their earlier days trying and failing at this facility. Some of the iconic names that recorded their album at Mekaal’s studio include Junoon, Rahat Fateh Ali Khan, Jal, Noori, Zeb & Haniya, Fariha Parvez, and Coven to name a few. Among the acts that rose to fame in the last decade or so are Poor Rich Boy, Khumariyaan, Sibti, and even the likes of Gen Z sensations Manu and Bilawal Lahooti have had their share of skill polished here.