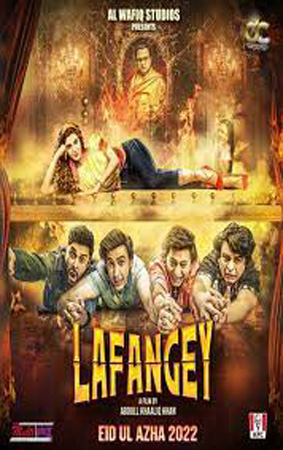 The Central Board of Film Sensors (CBFC) of Pakistan refused to clear Lafangey for release which was slated to hit screens on Eidul Azha.

According to Independent Urdu, CBFC has refused to give a sensor certificate to the Pakistani film Lafangey deeming it ‘unfit for screening in Pakistani theatres’.

CBFC Chairman Arshad Munir told: “All the present members unanimously decided that the film was not capable of screening it in Pakistani theatres.”

He continued: “The film uses very vulgar language and phrases with double meanings which are quite indecent.”

Arshad Munir, however, added that the filmmakers have the right to appeal which they can do whenever they wish to.

On the other hand, the film’s director Abdul Khaliq Khan found the decision very unfortunate because he believes that the film had nothing against the state or religion.

He continued: “It’s fiction and a story that we call a horror-comedy so lets ban fiction-writing and fiction films in the country.”

He also commented that this was a ban on story-telling and if that is the purpose, then the script should be censored. Abdul Khaliq Khan added: “It is totally inappropriate to do this after shooting.”

The producer of the film Tariq Habib Rind shared that he was deeply shocked by the process. He added that this was his first film as a producer and he planned to make several films in Pakistan to benefit the country’s cinema industry but his effort was halted in the first phase.

He further said that he lives abroad and brought capital to Pakistan. Tariq Habib Rind’s decision in regards to the film will be based on consultation on the matter. Lafangey was slated to release on Eidul Azha. The film stars Sami Khan, Mani, Mubeen Gabool, Saleem Miraj and Nazesh Jahangir in the lead roles.