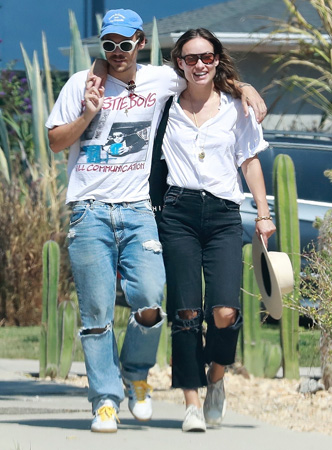 While Harry Styles might dig her cinema, Olivia Wilde definitely digs his music! On May 20, Olivia celebrated the release of her boyfriend’s third album, titled Harry’s House, by posting a sweet tribute to the “As It Was” singer on her Instagram Story.

The Don’t Worry Darling director shared a short video from the 2018 Polish film Cold War set to the tune of Harry’s new song “Music for A Sushi Restaurant.”

In the clip, a woman can be seen tiredly standing at the bar of a busy restaurant before she begins dancing along to Harry’s funky, feel-good hit. Olivia also kept her caption short and sweet, simply sharing a hands up emoji.

With lyrics that read, “Green eyes / Fried rice / I could crack an egg on you,” the track is one of many on Harry’s House that fans have speculated may be about Olivia, along with the songs “Late Night Talking” and “Cinema.”

Harry and Olivia first confirmed their romance back in January 2021, four months after it was revealed that the “Watermelon Sugar” singer had been cast in her film Don’t Worry Darling. While the couple have kept their relationship relatively private since then, they can often be spotted showing their support for one another IRL, like when Olivia attended Harry’s recent Coachella headlining performances last April.

When asked about the inspiration behind “Cinema” and its NSFW lyrics on The Howard Stern Show earlier this week, Harry artfully dodged the question by discussing his experience with Olivia on set instead. “I had a wonderful experience being directed by Olivia. I think there is something that obviously…acting is kind of very uncomfortable at times. I think you have to trust a lot,” he explained. “Being able to trust your director is a gift.” Harry continued, “That was very helpful and it really meant for kind of a really nice experience working on that movie.”