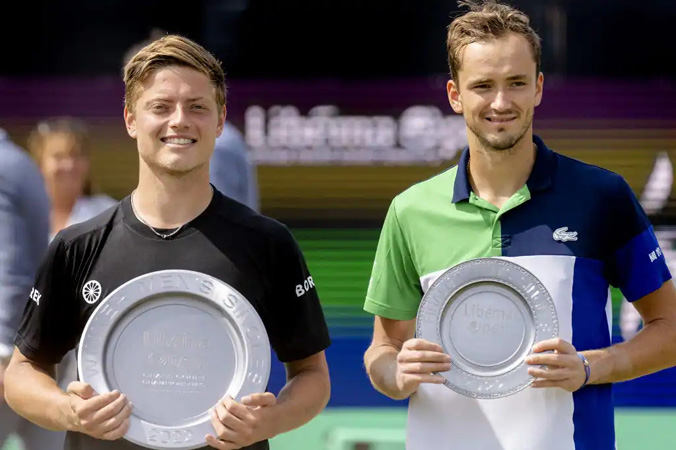 ‘S-HERTOGENBOSCH: Tim van Rijthoven made the most of a rare main tour berth as he claimed a first title by sweeping aside Daniil Medvedev 6-4, 6-1 in the final of the grass court tournament in ‘s-Hertogenbosch. The 25-year-old Dutchhman, ranked 205th in the world, took 1hr 5min to crush the Russian who, despite the loss, will return to number one in ATP rankings on Monday in place of Novak Djokovic. Van Rijthoven, who was invited into the Dutch event as a wild card, had spent this season, like most of his career, on the second tier Challenger Tour. “This is new for me, it’s going to take some time getting used to,” said Van Rijthoven, who had not won a tour-level match prior to this week, in his on-court interview. “What a dream this week. I would like to thank my team for staying humble this week, doing the normal things, not making this thing any bigger than it was.”

Medvedev told the new champion: “First time in an ATP final and you destroy the world number two.” Van Rijthoven fell in the qualifying rounds of this year’s first two majors, but he is the only one of Sunday’s singles finalists in ‘s-Hertogenbosch eligible to play at Wimbledon. Medvedev and the two women’s finalists, Belarusian Aryna Sabalenka and Russian Ekaterina Sabalenka, are banned from the grass-court major following Russia’s invasion of Ukraine. Earlier in the day, world number 30 Alexandrova sprung a surprise by beating top seed Sabalenka 7-5, 6-0. It is only the Russian’s second career title following her win in Shenzhen in 2020. Sabalenka, ranked sixth in the world and a Wimbledon semi-finalist last year, led 5-4 in the first set before her game imploded. The Belarusian conceded nine games in a row, coughing up 31 unforced errors. Alexandrova, 27, closed out the match with her best weapon, two service winners and an ace.