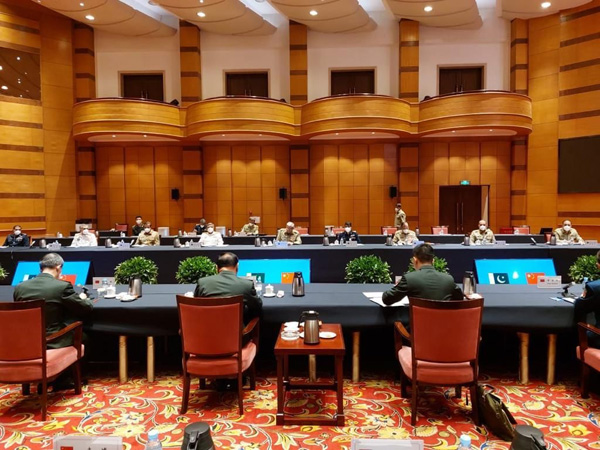 The military leadership of China and Pakistan Sunday agreed to step up their cooperation, building on their strategic partnership in the challenging times.

A high-powered military delegation from Pakistan – comprising senior military officials from the army, navy and air force – visited China from June 9 to 12 as part of a meeting of Pakistan China Joint Military Cooperation Committee (PCJMCC).

Pakistan’s army chief and vice chairman of China’s Central Military Commission are part of the committee.

Both sides discussed their perspectives on international and regional security situation, and expressed satisfaction over the defence cooperation between the two countries, according to the Inter Services Public Relations. It further said that Pakistan and China reaffirmed their strategic partnership in challenging times and agreed to continue regular exchange of perspectives on issues of mutual interest.

Both sides also vowed to enhance their training, technology and counterterrorism cooperation at tri-service level.

Speaking on the occasion, General Zhang Youxia said China and Pakistan were all-weather strategic cooperative partners and the two sides had maintained close coordination and firmly supported each other on issues involving each other’s core interests over the years.

He said Beijing was willing to build up communication with Pakistan, strengthen cooperation, deepen pragmatic exchanges, properly respond to the complex factors in the regional situation, and promote the in-depth development of bilateral relations, according to the Ministry of National Defence of China.

General Zhang Youxia said in the face of a century of change and the epidemic in the century, President Xi Jinping put forward global development initiatives and global security initiatives to provide China’s solutions to promote the establishment of a more just and reasonable global governance system.

Gen. Bajwa said the friendship between Pakistan and China was unbreakable and as strong as a rock, and no matter how the international and regional situation changes, Pakistan will firmly stand with China at any time.

He said Pakistan was willing to further strengthen dialogue and coordination with the Chinese army, carry out mutually beneficial cooperation, combat terrorist forces, strive to improve the ability of both sides to deal with various security challenges, safeguard the common interests of the two countries, and contribute to regional peace.

The two sides strongly condemned the terrorist attack on the shuttle bus of the Confucius Institute in Karachi, and stressed that any attempt to undermine Sino-Pakistan friendship will not succeed.

Relations between Pakistan and China have shown great improvement in recent years in all fields including defence.

Pakistan now heavily relies on China for military equipment. Only recently, China provided Pakistan with J-10 fighter jets. Pakistan is the only country to have been provided the war planes since their induction into the Chinese military showing deepening military ties between the two sides.