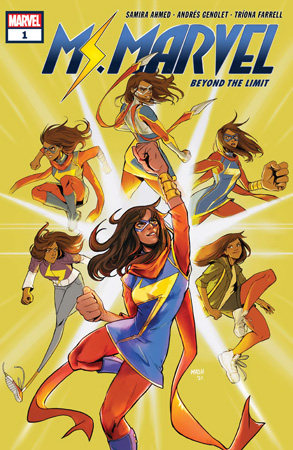 From super fan to superhero, 19-year-old Pakistani-Canadian actress Iman Vellani has made the ultimate transformation in the new Disney+ television show “Ms. Marvel”.

Vellani plays Marvel Comics’ Kamala Khan, a 16-year-old high school student and superhero fangirl who discovers she has powers of her own.

Like her character, Vellani is also a huge superhero fan, who made her own Ms. Marvel costume when she was 15.

“It’s so infectious. Her fascination and excitement about the Avengers are so shared with real life Marvel fans and speaking as one, I just felt like I could slip into Kamala’s shoes very easily,” Vellani told Reuters.

“That’s really all we were channelling throughout the filming of the show, just how I would react in real life.”

Ms. Marvel is seen as the biggest breakout star in Marvel Comics in the last decade.

As well as playing Khan in the television show, Vellani is set to team up with Brie Larson, who plays Captain Marvel, in the 2023 film ‘The Marvels’.

“Brie was the first person to reach out to me and kind of just share her own experiences of how this role has kind of changed her, her own career,” Vellani said.

“Marvel gives actors just an insane amount of, you know, attention and a huge fandom so it can be really overwhelming at times and I’m just so glad that she was there to kind of hold my hand and answer all my questions,” she added.