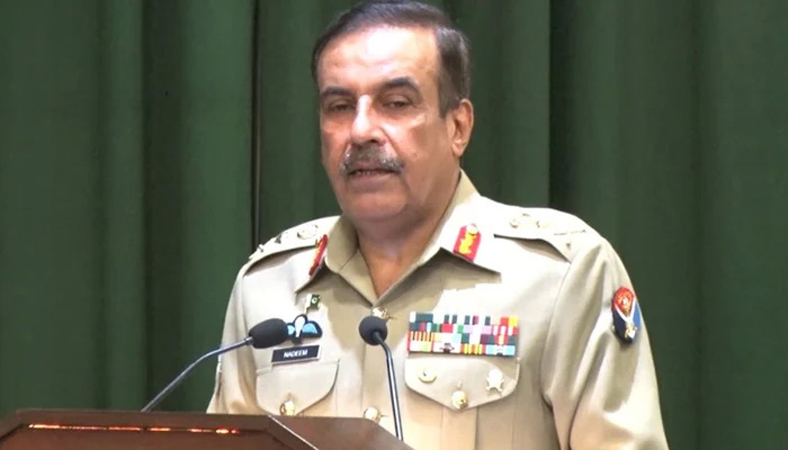 He made these remarks during a keynote at a seminar on “Regional Environment and Imperatives of Security” at the NUST Institute of Policy Studies (NIPS) in Islamabad on Monday.

According to the Inter Services Public Relations (ISPR), Gen Nadeem, who is also deputy chairman of the National Command Authority (NCA), reiterated the significance of Pakistan’s nuclear capability as the “guarantor of deterrence and defence of the motherland.” He said Pakistan’s nuclear programme enjoys across board support and “the NCA, with all its political and military leadership, stands firm for the strategic programme”.

He asserted that national security was indivisible and assured that under no circumstances shall Pakistan allow a compromise on its nuclear programme.

“Pakistan is a confident and responsible nuclear power. It pursues the policy of full-spectrum deterrence within the precincts of credible minimum deterrence. Our national security and safety architecture meets all national and international obligations and caters for all kinds of scenarios,” the chairman added.

General Nadeem said as was the norm in other nuclear-capable nations, “unnecessary and unfounded views on the strategic programme should be avoided. When necessary, NCA is the right forum to issue specific responses or views,” he added.

The statement by the top military official comes after PTI Chairman Imran Khan recently urged the establishment to make the ‘right decisions’.

In an interview with a news channel, Imran had warned that if Pakistan were to lose its nuclear deterrence, it would fragment into “three pieces”.

Imran said the current political situation was a problem for the country as well as the establishment, which had consistently claimed it was neutral as the country went through political upheaval since the filing of the no-confidence motion against the former premier on March 8.

“If the establishment doesn’t make the right decisions then I can assure [you] in writing that [before everyone else] they and the army will be destroyed because what will become of the country if it goes bankrupt,” he said.

“Pakistan is going towards a default. If that happens then which institution will be [worst] hit? The army. After it is hit, what concession will be taken from us? Denuclearization,” Imran said. “If the right decisions aren’t made at this time then the country is going towards suicide,” he added.