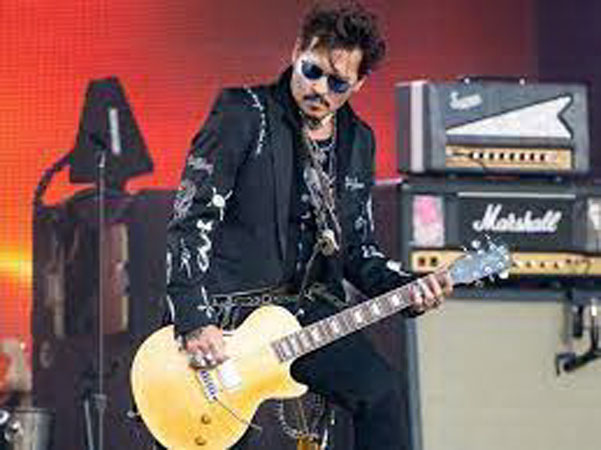 Johnny Depp is spending some time across the pond as he awaits the verdict in his defamation trial against ex-wife Amber Heard.

The Pirates of the Caribbean star took the stage at Jeff Beck’s concert in Sheffield, England, on May 29 to perform their 2020 collaboration “Isolation,” which is a remake of the 1970 John Lennon track. As seen in videos circulating online, Depp also joined Beck on his guitar for a cover of Marvin Gaye’s “What’s Going On” and Jimi Hendrix’s “Little Wing.”

A source close to Depp, who founded the rock supergroup Hollywood Vampires, tells E! News that the 58-year-old was in town due to “previously scheduled work obligations.”

Depp’s surprise appearance came two days after closing arguments were delivered inside a Virginia courtroom in his ongoing legal battle with Heard, who he is suing for $50 million over a 2018 Washington Post op-ed she penned in which she described herself as a “public figure representing domestic abuse.” Heard never mentioned Depp by name in the essay.

While delivering closing arguments on May 27, Depp’s attorney Camille Vasquez called Heard the abuser in the former couple’s relationship and accused the Aquaman actress of lying about alleged injuries from the actor. Meanwhile, the legal team for Heard-who is countersuing Depp for $100 million-argued that their client wrote the column as a way to promote legislative measures designed to protect victims of domestic abuse and “if Ms. Heard wanted to be malicious for Mr. Depp, the article would be very different.”

Jury deliberations started on Friday and is expected to continue on May 31.

During the month-long trial, both Depp and Heard took the stand to deliver testimonies. When called as a rebuttal witness on May 25, Depp denied many allegations brought forth by Heard, including claims of domestic abuse and sexual assault.

“It’s insane to hear heinous accusations of violence, sexual violence, that she’s attributed to me, that she’s accused me of,” Depp said. “I don’t think anyone enjoys having to split themselves open and tell the truth, but there are times when one simply has to because it’s gotten out of control. Horrible. Ridiculous. Humiliating. Ludicrous. Painful. Savage. Unimaginably brutal. Cruel and all false.”

In a rebuttal testimony of her own, Heard said she has been “harassed, humiliated, threatened every single day” amid her legal battle with Depp.

“I receive hundreds of death threats regularly, if not daily,” she told the jury. “Thousands, since this trial has started. People mocking…my testimony about being assaulted.”