No ‘deal’ struck with establishment: Imran 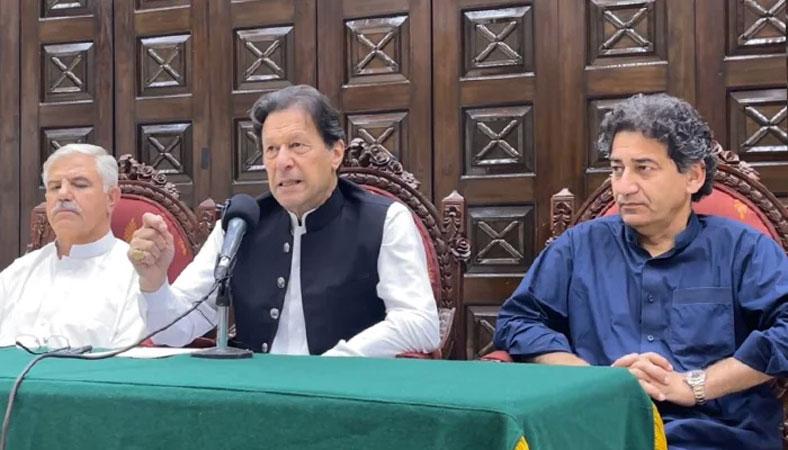 PTI Chairman Imran Khan Friday rebutted rumours of striking a deal with the establishment and said he had ended the Azadi March to avoid bloodshed.

Addressing a press conference in Peshawar a day after the violent long march came to an abrupt end, Imran said he had witnessed rising anger among the masses after the police crackdown on the party leaders across the major cities.

“I observed the anger rising among people against the police after the things they did to stop the march. Keeping that in view, if we had continued to march as announced, the country would have plunged into chaos and anarchy.”

He slammed the government for the “brutal” crackdown on the protesters, saying Interior Minister Rana Sanaullah deployed police officers of his choice to crack down on the PTI workers. Refusing to accept “foreign slavery”, the PTI chairman said he would devise a plan within the next six days and take to the streets once again.

“I am appealing to the entire nation: I have started a jihad against them [government]. The Supreme Court has an important role to play in this regard,” the ousted prime minister said, says a news report. The PTI chairman added his party would be completely prepared before taking to the streets this time, adding that the PTI seeks the apex court’s protection.

He also warned the government of repercussions if it implements the same strategy of launching a crackdown in the next phase of the march.

“Our people will not be arrested from their houses […] people were under the wrong impression that protesting was their democratic right,” the ex-premier said while taking a jibe at the government. On May 25 – the day the long march took place – internet speed was slowed down, therefore, the PTI was under the impression that the barricades and hurdles would be moved from their way, the cricketer turned politician said.

“Since we know what the government can do, we will hold our march after planning it. Our aim will be not to spread further chaos, but let me make one thing clear: I will not accept the government of culprits.”

Although Khan stressed that he would not accept the current set-up, the ousted premier said that “doors were open for negotiations, but a prerequisite for talks with the government would be that it holds snap elections in June.”

Defending KP CM Mahmood for his participation in the long march, Khan said the PTI leader was a citizen of Pakistan who reserves the right to protest against the government.

The PTI chairman defended Mahmood after Interior Minister Sanaullah said that the federal government had decided to take legal action against him. “KP CM’s participation in (Azadi March) with armed police is an attack on the federation,” he said, adding that his department had contacted the law ministry for its opinion on initiating action against the KP CM. Imran said his party would challenge the recently introduced electoral reforms in the National Assembly in the Supreme Court.

Imran said he had invited the then-opposition to hold talks with his government on EVMs and the matter of voting rights for overseas Pakistanis, but his offer was declined repeatedly. The ousted prime minister added that the people who bank on “fake votes” were afraid of the electronic voting machines. “If India conducts elections via EVMs, then why not us. All the elections here are controversial.”

Responding to a journalist’s questions, Khan said he could give a hard-hitting answer to the reporter, but claimed that he did not want to do so. He stressed that no one “conquers” a country, but they come into power through elections, just like his government did in 2018. Khan said he was not against the “corrupt” people being in power, rather they wanted transparent elections in the country so no one could raise objections to their results.

To a question that PTI was spreading hate, Khan said he was not involved in inciting the people. “We are trying to unite the people, without dividing people based on ethnicity.” “All your statements are wrong and instead of asking questions you made a speech during a press conference,” Khan said, as he got up with anger.\ Khan added that he had written a letter to the Chief Justice of Pakistan Umar Ata Bandial, asking him whether protesting is a democratic right of the people or not. “I have written the letter to the chief justice of Pakistan, asking him to make the situation clearer […] I want to ask the judiciary that should we accept every demand like a flock,” he said. Lamenting how people were injured due to shelling at Islamabad’s D-Chowk, Imran said he had written to Chief Justice of Pakistan Umar Ata Bandial asking whether or not the party had the right to stage a peaceful protest in a democracy. “This is the fundamental right of a citizen […] I ask our judiciary, do you think we will remain silent [like] sheep and accept all of this? If you think this, it means that we are pushing the country towards treason. If you do not allow people to stage peaceful protests, what other options do they have left?” He said that he had written a letter to the CJP to make his position “clear”, reiterating that he would take to the streets again after six days. In six days we will find out whether or not the apex court protects our fundamental rights, he said. The manner in which lawyers and women were forced to disembark from a bus and were “beaten”, had anyone seen something like that before, he asked. “Which justice system allows this? The entire nation should know who stands for [their] rights and who is carrying out oppression.” Talking about the decision to hike the prices of all petroleum products by Rs30, Imran lambasted the government for “succumbing” to the International Monetary Fund’s (IMF) pressure, asking whether such a massive hike had been seen ever before.