Imran, others booked for ‘riots and arson’ 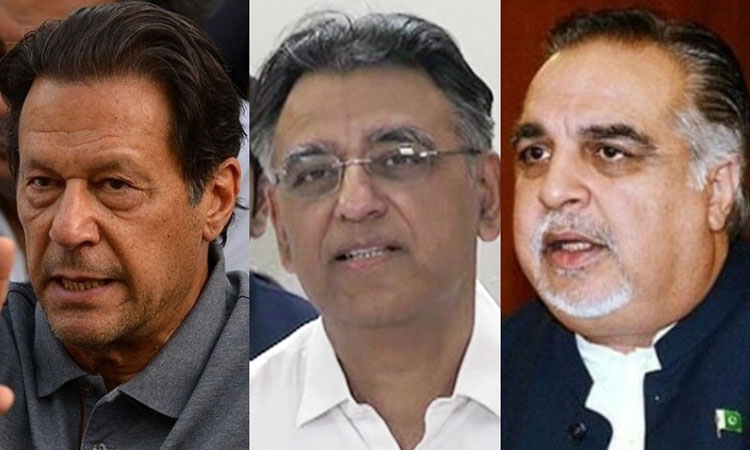 Islamabad police on Thursday booked PTI Chairman Imran Khan and other leaders of his party in two separate cases over allegations of arson and vandalism in the capital the previous night. Apart from Imran Khan, police also registered cases against PTI leaders Asad Umar, Imran Ismail, Raja Khurram Nawaz, Ali Amin Gandapur, and Ali Nawaz Awan. The police registered two separate cases at the Kohsar Police Station for “rioting and arson”. The first FIR was registered at the complaint of a sub-inspector (SI) named Asif Raza, while the second one was filed on behalf of SI Ghulam Sarwar. The cases have been registered against 150 people out of which 39 have been arrested.

They also mention the burning of the metro bus stations at Islamabad’s Jinnah Avenue, damaging a government vehicle at the Express Chowk, and breaking the glass windows of Geo News and Jang office.

Meanwhile, the second FIR was registered at 3:20am on the complaint of SI Ghulam Sarwar under the same sections as the prior FIR. Sarwar claimed that he and other police officers were on duty at Express Chowk when at 12:30am, 100-150 PTI protesters – equipped with rods and inflammatory materials – chanted slogans, incited people and set fire to the trees and Metro Bus station near Geo Chowk, along with smashing mirrors of Geo News’ office. SI Sarwar said as the police tried to disperse the crowd, the PTI workers resorted to pelting stones and also damaged a government bus. He added that 39 individuals were subsequently arrested.

Both FIRs revolve around the events that transpired on the streets of Islamabad during the PTI’s Azadi March last night. PTI party workers and supporters were present at D-Chowk on Wednesday in the face of intense police shelling.

Interior Minister Rana Sanaullah while speaking to Geo News said that the federal government had decided to take legal action against Khyber Pakhtunkhwa Chief Minister Mahmood Khan. “KP CM’s participation in (Azadi March) with armed police is an attack on the federation,” said the security czar of the country. He added that his department has contacted the law ministry for its opinion on initiating action against the KP CM.

“Federal government employees deputed to Khyber Pakhtunkhwa abetted PTI’s fitna march. It has been decided to take action against federal government police officers and deputed appointed in KP,” said Sanaullah, adding that “the officers used their posts against the law.”

Television footage showed smoke rising from the ground and fires in the green belts adjacent to Islamabad’s main roads. The government claimed that the PTI supporters had set the fires whereas the claim from the PTI camp was that the fires were a result of police shelling. Neither claim could be independently verified.