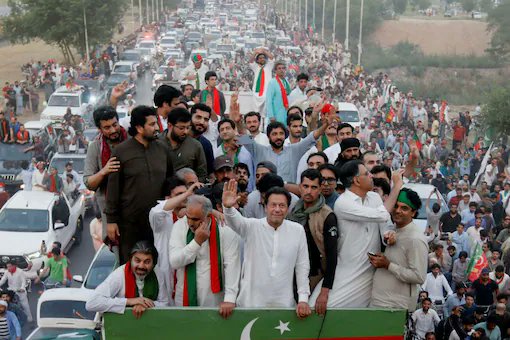 We’ve always been told that protests are beauty of democracy. However, what they don’t tell us is how the same ingredient that beautifies democracy is a recipe for economic disaster.

With metro station burnt down by a group of violent protestors, trees set on fire, disrupted mobile signals ordered by the government, shelling of tear gas, long queues at petrol stations and no cash in ATMs, another happening long march that turned into a one day protest came to an end.

The former Prime Minister Imran Khan while addressing protesters at Islamabad’s Jinnah Avenue asked the government to announce election date in a weeks’ time or he would come back to the federal capital with the entire nation otherwise.

Imran Khan’s party gained popularity on dharnas since he has his way of connecting with people. His monotonous speeches have had a common man believe that he is the only solution to the country’s issues and is the ultimate saviour to the nation.

But the problem is, why do people of Pakistan think that Imran Khan is their saviour. Why do people think any political leader is their savior for that matter? The bitter truth that we tend to forget is, we are all participants in a reality show called politics. You and I have been manipulated into believing that this is a battle between good and evil, but the truth is, it isn’t. It’s a battle of egos to see who will be chosen to rule the country.

Imran Khan is not returning to the streets for you, he is returning to the streets for himself, as he needs to reclaim power before November in order to secure his political future. PDM unknowingly benefitted Khan by having him removed from the office because let’s be real, Khan’s performance wouldn’t have ensured him successful elections but his ouster has increased his popularity exponentially.

The PDM was able to oust Imran Khan, but in power they are clueless and their uncertainty on elections has caused Pakistan to continue to struggle economically, and it will continue to do so since the system is intended solely to benefit the wealthy.

Many people feel that the establishment is completely behind this resurrection. IK’s performance alone would not have been enough to win him the election, therefore a backup plan was required. The idea was misunderstood by PDM and PTI took complete advantage of it.

When it comes to politics, there is little to no room left for discussion, everyone tries to impose their narrative on you and label you with names if you have a different opinion. The polarization of the people due to blind support of political parties will be the end of us.

Why should the people suffer at the hands of crooked politicians, whether N-league or PTI, when it is the daily commuters who are affected? Why is it that a small group of people can shut down a whole city for their own political gains?

The day we stop dividing ourselves and realize we should all be united against the Pakistani elite status quo that keeps us all enslaved is the day we will bring about real change. All this political trickery is nothing but nonsense, and it’s not for the people but for power. Choose to stay ‘neutral,’ chill out in your homes and watch how these politicians fight for power.