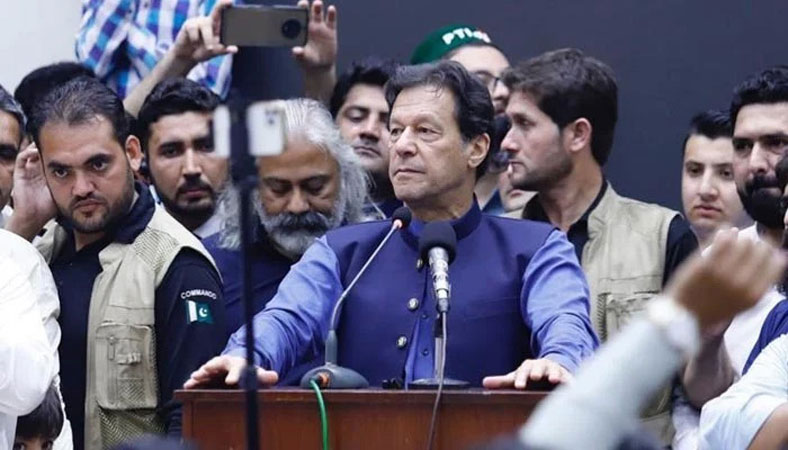 Pledging to go ahead with the ‘Azadi March’, PTI Chairman and former prime minister Imran Khan Tuesday said he will see whether the judiciary and ‘neutral’s will support ‘thieves and servants of America or support the real independence of Pakistan’.

Addressing a press conference in Peshawar, Imran said he will lead the “biggest procession in Pakistan’s history”.

Criticizing the government, Imran said Sharif family was adopting the same tactics that military dictators had been doing since 1985.

“They only remember democracy as soon as they leave power,” he said, asking how many times these parties had taken to the streets throughout the PTI government’s term.

“They entered the houses of people and didn’t care for the privacy of women,” he said, adding that the PTI government never tried stopping the then opposition leaders from exercising their right to assemble and stage protests.

He then asked if the PTI government had made any arrests when the PPP Chairman Bilawal Bhutto Zardari and JUI-F chief Fazlur Rehman marched towards Islamabad.

He condemned that the police entered the house of a retired army major while referring to a video that surfaced on the social media, in which a girl could be in seen tears claiming that the cops had “harassed” her.

“Do we want to make the country Quaid-e-Azam’s Pakistan or the Pakistan of these thieves and robbers?” Imran Khan asked and said 60% of the federal cabinet comprised criminals who were roaming freely after attaining bails, while they still had cases of corruption worth Rs24 billion against them, says a news report. “The crime minister and his son had to be sentenced but now they are making decisions for the country,” he said and claimed that the PTI had not broken any law in its 26 years of political history. Imran said that it was the democratic right of his party to carry on with the said that PTI’s “Azadi March” is the party’s democratic right.

“W e are marching to Islamabad because it was proved in the National Security Council (NSC) meeting that a foreign conspiracy was hatched and the [PTI] government was toppled,” Khan said, adding that those who have been criminals for the last 30 years were brought into power.

Calling out to the judiciary of Pakistan, the PTI leader said that the courts’ reputation would be tarnished if it permitted what was happening in the country and their silence would “prove that there was no democracy in the country”. “We are noting the names of each and every official and bureaucrat. Our message to the bureaucracy is that action will be taken against them if they follow illegal orders,” he said.

Khan asked the bureaucracy of Punjab how they could follow the orders of Punjab Chief Minister Hamza Shahbaz, saying “he [Hamza] doesn’t have a majority vote”. He also warned the authorities of action against every unlawful order they follow. The PTI chairman asked his supporters to “break the chains of fear” while citing the example of how the Afghans fought foreign powers. Khan said that the government could not put a sea of people, who were willing to march to Islamabad in his support, in jail.

The former prime minister then said that the entire nation was “looking towards the neutrals” to intervene. “You will also be responsible if the country moves towards destruction,” he said. “I have a message for the neutrals, judges, and lawyers: it is a decisive time. I ask the judiciary and neutrals what kind of a government they want”.

“We will see whether you support these thieves and servants of America or support the real independence of Pakistan,” the ex-PM said. He then asked, “what kind of treason was being committed in Pakistan that PTI’s MNAs had to be arrested”. Speaking about the economic condition of Pakistan, Imran said the PTI had clearly said that the situation was getting worse but the incumbent government ruined the economy in just 1.5 months.

He said that there was only one solution to all the problems the country was facing: immediate elections. Khan warned that he “feared that Pakistan would witness the same fate as Sri Lanka”. He urged the youth, which he also referred to as the “attack force”, to power through all obstacles placed by the government on their way to Islamabad. Imran said he hoped the youth already knew its responsibilities. “Our attack force, comprising all of you, will be responsible to remove all impediments when we begin our march tomorrow,” Imran said.

He told his supporters to consider the march as “jihad” and not politics. “You must prepare yourselves [in advance] as the government might suspend mobile networks and target other communication modes.” He said his struggle would continue until the marchers got an election date, assemblies were dissolved and the imported government was sent packing. Commenting on last night’s raid at the home of retired Justice Nasira Iqbal, he said: “Her house was raided last night […] I want to ask the neutrals and the judiciary, the scenes that you are witnessing, what kind of government can do this? Not a democratic one.” He asserted that he would lead a rally from Khyber Pakhtunkhwa to Islamabad tomorrow, saying that for him this was no longer about politics but was a “jihad”. Imran alleged that the current government had been brought into power by the United States because it would bend over backwards for them.