The Con Artists by Luke Healy — a beautifully observed masterpiece 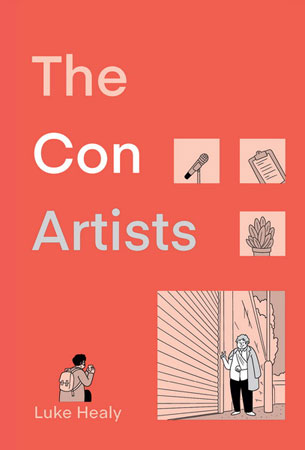 The Con Artists by Luke Healy is my favourite graphic novel of the year so far, and to be honest, it might just be among my favourite comics ever. I’ve already read it twice, yet still I feel that I could go back to it again some time quite soon. Healy is one of those very noticing artists, and the great pleasure of his deeply satisfying fourth book, which is about an old friendship that will shortly curdle, lies in small things: little details you may not notice the first time around; ambiguities that nag away at you. Then again, even on a first reading, it’s a stand-out: so funny and melancholy, so knowing and true. Frank and Giorgio, the two men at the heart of it, are brilliant, vivid creations, and the passive-aggressive scratchiness between them is so beautifully observed. It isn’t hard at all to imagine such frenemies as the stars of some future film or TV series, though personally I would be quite content if Healy would only give them another outing between hard covers.