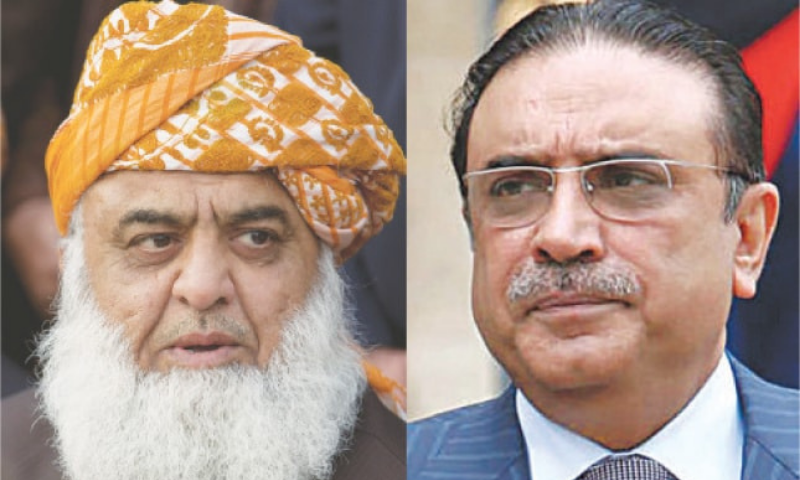 ISLAMABAD: PPP Co-chairman Asif Ali Zardari and Jamiat Ulema-e-Islam (JUI-F) chief Maulana Fazlur Rehman stated that only a national government could lead the nation out of the current crisis “created” by the previous government.

On Friday, during a meeting at the Zardari House, both leaders agreed that Pakistan is their top priority and that they will take all necessary steps for its improvement in consultation with all ruling alliance parties.

The meeting between the two key leaders of the ruling coalition is crucial given the ongoing political crisis in the country as a result of the PTI’s pressure on the incumbent government to call for early elections.

According to a statement issued after the meeting, both sides also agreed that all future decisions would be made in consultation with coalition partners, as was the case previously.

The meeting was a continuation of ongoing consultations between coalition partners.

Asif Zardari met with the former prime minister and PML-Q president Chaudhry Shujaat Hussain on Thursday. The co-chairman of the PPP thanked Shujaat for his unwavering support of the coalition government and also briefed him on the current political climate.

Chaudhry Salik Hussain, Tariq Bashir Cheema, and Farrukh Khan, a member of parliament for the PML-Q, were also present.

At a time when the coalition government had to make difficult decisions in the coming days, the meeting was deemed crucial, and consultations were underway to bring all coalition partners on the same page.

It was Asif Zardari and Ch Shujaat’s second meeting since the formation of the coalition government.