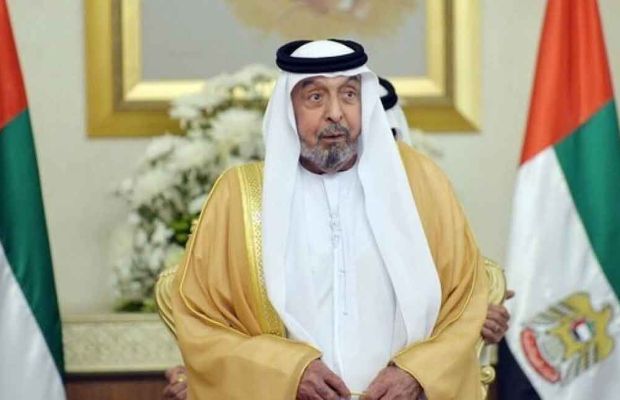 On Friday (today) the United Arab Emirates President Sheikh Khalifa bin Zayed Al-Nahyan passed away at the age of 73 after battling illness for several years,  the Ministry of Presidential Affairs said.

“The Ministry of Presidential Affairs condoles the people of the UAE, the Arab and Islamic nation and the world over the demise of His Highness Sheikh Khalifa bin Zayed Al Nahyan, the president of the UAE,” a Wam statement read.

“The UAE has lost its righteous son and leader of the ’empowerment phase’ and guardian of its blessed journey,” MbZ said on Twitter, praising Khalifa’s wisdom and generosity.

The UAE would observe a 40-day mourning period with flags flown at half-mast as of Friday and suspend work at all public and private sector entities for three days, the ministry said. 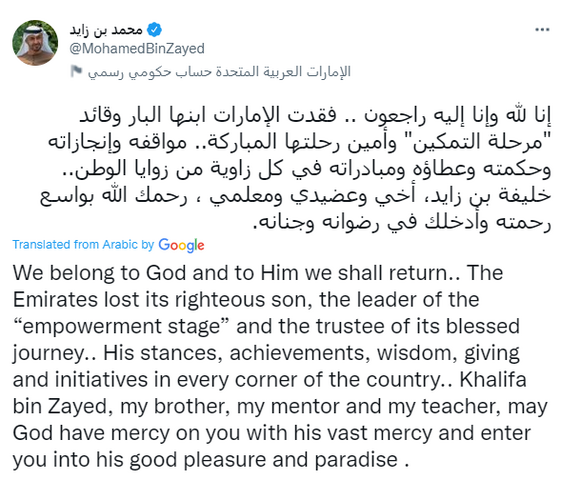 According to Reuters, Sheikh Khalifa bin Zayed Al Nahyan, who was born in 1948, came to power in 2004 in the richest emirate Abu Dhabi and became the head of state. He is expected to be succeeded as ruler of Abu Dhabi by his half-brother Crown Prince Sheikh Mohammed bin Zayed al-Nahyan.

Mohammed bin Zayed has been the de facto ruler of the U.S.-allied UAE, particularly after Khalifa suffered a stroke in 2014, following which he has rarely been seen in public.

Sheikh Khalifa was renowned for being a good listener, modest, affable and interested in his people, frequently conducting direct outreach through official missions and other occasions. As a result, he was much loved and revered.

Deeply grieved to hear about the passing of HH Sheikh Khalifa bin Zayed Al-Nahyan, President of UAE. UAE has lost a visionary leader & Pakistan a great friend. We send our heartfelt condolences & sympathies to the government & people of the UAE. May Allah rest his soul in peace!

Chief of Army Staff General Qamar Javed Bajwa and all the ranks of the Pakistan Army expressed heartfelt condolence on the sad demise of the president of the UAE.

Heartfelt condolences to the family of HH Sheikh Khalifa bin Zaid Al Nahyan, and to the people of UAE 🇦🇪 . I will always remember him for the friendship & kindness he showed my family. A true friend of Pakistan 🇵🇰, he always supported the country in its moment of need.
1/2