Sri Lanka imposes curfew in capital after 20 injured in clashes 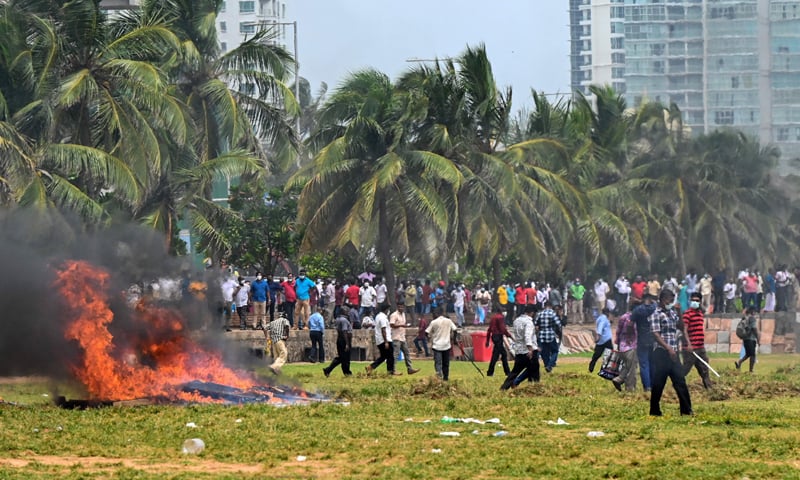 Sri Lankan police imposed a curfew on Monday after clashes between rival political camps, as anger builds over the island’s worst economic crisis since independence.

Months of blackouts and dire shortages of food, fuel and medicines have caused widespread suffering across the South Asian island and weeks of overwhelmingly peaceful anti-government protests.

At least 20 people were injured in the violence in central Colombo, according to officials.

Police fired tear gas and water cannon on the government supporters who breached police lines to smash tents and other structures set up by anti-government protesters.

“The economic crisis we’re in needs an economic solution which this administration is committed to resolving,” he tweeted.

While emotions are running high in #lka, I urge our general public to exercise restraint & remember that violence only begets violence. The economic crisis we’re in needs an economic solution which this administration is committed to resolving.

On Friday, the government imposed a state of emergency granting the military sweeping powers to arrest and detain people after trade unions brought the country to a virtual standstill hoping to pressure the Rajapaksas to step down.

The defence ministry said in a statement on Sunday that anti-government demonstrators were behaving in a “provocative and threatening manner” and disrupting essential services.

Unions said they would stage daily protests from Monday to pressure the government to revoke the emergency.

Union leader Ravi Kumudesh said they will mobilise both state and private sector workers to storm the national parliament when it opens its next session on May 17.

“What we want is for the president and his family to go,” Kumudesh said in a statement.

President Rajapaksa has not been seen in public since tens of thousands attempted to storm his private residence in Colombo on March 31.

Official sources say the president may ask his brother Mahinda to stand down in an effort to clear the way for a unity government to navigate Sri Lanka through the crisis.

But the country’s largest opposition party has already said it will not join any government helmed by a member of the Rajapaksa clan.

This left it short of foreign currency needed to pay off its debt, forcing the government to ban the imports of many goods.

This in turn has led to severe shortages, runaway inflation and lengthy power blackouts.

In April, the country announced it was defaulting on its $51 billion foreign debt.