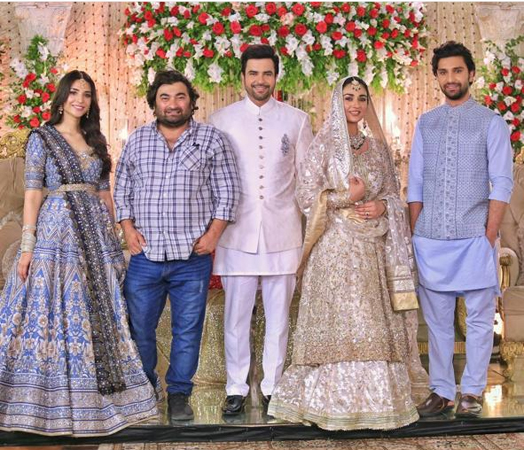 Drama Hum Tum has finished its month-long journey and saying goodbye is as difficult for the cast as it is for the fans.

Lead actors Ahad Raza Mir, Ramsha Khan and Junaid Khan bade the show farewell, grateful for the journey and the family they’ve created on and beyond the set, thanking fans for all their love.

The Ramazan rom-com that has so many hearts in a grasp aired from April 3 to May 3. The cast took to their Instagram pages to say their goodbyes, honouring their experience.

“Tonight we end the Hum Tum journey on a very happy and positive note,” wrote Junaid.

“Hum Tum was just as much of an experience for us it has been for all our fans and viewers. Every minute and every second of it was filled with lots love, hard work and most important team work!”

He gave a “big shoutout” to the director Danish Nawaz, the entire crew within Momina Duraid’s production team, his co-actors and fans who “made the drama a huge success and #Sarmad a household name.”

“Thank you for being part of the family,” Mir said, with a simple farewell message and shared a cute family photo of the cast taking a selfie on his story.

“Goodbyes are always hard! Thank you for the love,” Ramsha wrote in the caption. She shared several photos including fan art of her character and Mir’s, nearing the moment of a much-awaited confession at the end of the show.

Actor Sarah Khan, one of the four leads, shared fan art that included caricatures of the cast on her Instagram story.

Hum Tum, described as a “2022, modern and Gen Z rendition of a hate to love story,” was a refreshing change for drama enthusiasts as the characters rebelled against gender stereotypes, encouraging healthier relationships all of which was painted with lighthearted comedy that swept viewers into the plot, winning them over.

It may be time to say goodbye but we’re grateful for the hello and hope to see more dramas like Hum Tum.