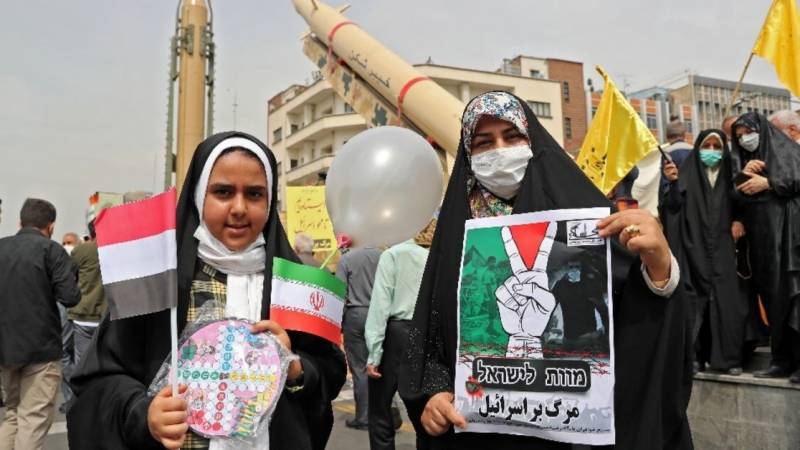 The Quds (Jerusalem) Day commemorations, which are held on the last Friday of the Muslim holy month of Ramadan, were launched in 1979 by  Iran’s revolutionary leader Ayatollah Ruhollah Khomeini.

They also held up signs reading “Jerusalem is ours” and “Quds Day is the day of Islam”, it said, noting that rallies took place in the capital Tehran and several Iranian cities.

In Tehran, ballistic missiles were on display and protesters torched Israeli flags.

Iran does not recognise its arch-foe Israel and supporting the Palestinian cause has been a pillar of its foreign policy since the 1979 Islamic Revolution.

“The Islamic republic of Iran backs and supports the Palestinian resistance… and we condemn the treacherous move to normalise relations (with Israel),” he said.

In 2020, the UAE, Bahrain and Morocco normalised ties with Israel through different deals.

Khamenei also slammed those in the West backing Ukraine against Russia’s invasion.

“They are making so much noise about the situation in Ukraine… (and) are keeping totally silent about the crimes in Palestine”.

The rallies, that were held after a two-year pause due to Covid restrictions, took place against the backdrop of deadly violence in Israel and the occupied West Bank, and fierce clashes in Jerusalem.

The fighting has sparked fears of another conflict after last year’s 11-day war between Israel and armed groups in the Gaza Strip.

Over the past two weeks, nearly 300 Palestinians have been injured in clashes at the Al-Aqsa compound, Islam’s third-holiest site. It is also Judaism’s holiest place and known to Jews as the Temple Mount.

The unrest came as Israeli security forces have stepped up operations in the West Bank since March 22.

The violence has killed 12 Israelis, including an Arab-Israeli police officer, and two Ukrainians in four separate attacks inside Israel.

A total of 26 Palestinians and three Israeli Arabs have also died since March 22, among them the perpetrators of the attacks and those killed by Israeli security forces in West Bank operations.

Palestinians have been angered by an uptick in Jewish visits to the Al-Aqsa compound, where Jews can go but are not allowed to pray.