Imran wants 2m people to gather in Islamabad for sit-in 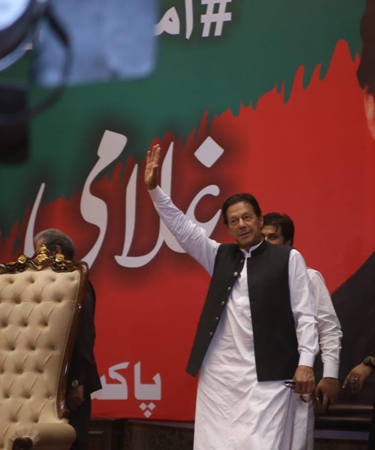 Pakistan Tehreek-e-Insaf (PTI) Chairman Imran Khan said on Wednesday that at least two million people should reach Islamabad on his call against the current government.

“I want two million people to come to Islamabad when I give the call. I want all of you to go to the people and preach to them about our movement for true freedom,” he said while addressing an adoring crowd chanting slogans in support of him at a workers’ convention in Lahore. He told party workers to go to their neighbourhoods and inform the people of the “conspiracy” that had been hatched to topple the PTI government in the form of a no-trust motion in the National Assembly. “When you go to the people, you have to tell them that an imported government has been brought through a conspiracy […] this means that the United States will control us through these stooges and boot polishers,” he said, referring to the former opposition that has since formed the new government. During his address, Imran reiterated that he was ousted through an alleged conspiracy. “Frist there was a conspiracy against my government then there was an interference,” he alleged. He claimed the US would control Pakistan with the new government in power through a “conspiracy”. He urged party workers to inform the people of the PTI government’s performance and the way it had effectively handled the economy while also successfully battling the Covid-19 pandemic.

The former premier again accused Chief Election Commissioner Sikandar Sultan Raja of working for the Pakistan Muslim League-Nawaz (PML-N), calling him “the PML-N’s agent”. He accused the CEC of harbouring a bias against his party. “He has been giving decisions against us,” Imran added.