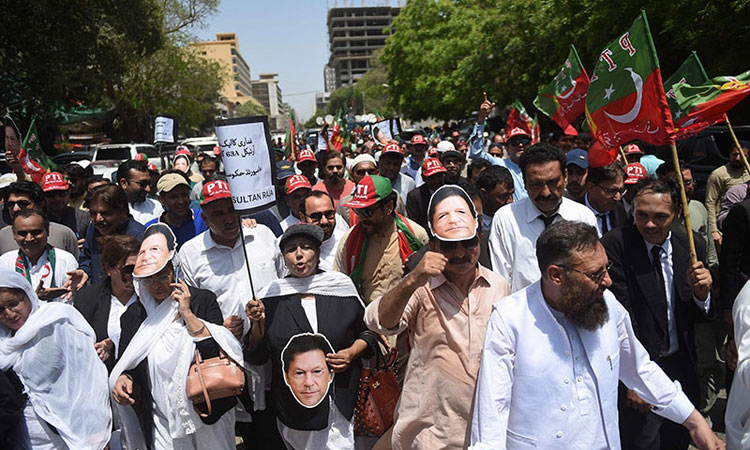 The demonstrations were held in Karachi, Lahore, Islamabad, Peshawar, Gujrat and Faisalabad besides other cities. In Karachi, police were deployed outside the ECP office and three mobile vans were also present at the site.

According to a statement issued by the PTI spokesperson Saddam Kumbhar, Opposition Leader in the Sindh Assembly Haleem Adil Sheikh and other party leaders, including Firdous Shamim Naqvi, Bilal Ghaffar, Aftab Siddiqui, Raja Azhar and Saifur Rehman, were among the demonstrators. Sheikh addressed the protesters, saying: “We are here to make the shameless feel some shame.”

Without naming anyone, he added, “You are the Election Commission. When did you become the corruption commission?” The PTI leader called the present times “black days” and called the ECP “patron of turncoats”, says a news report.

Last night, the PTI had also taken out a bike rally in port city against the coalition government. PTI leader and former human rights minister Dr Shireen Mazari tweeted: “Motorbike rally in Karachi last night against imported govt brought in through [the] US regime change conspiracy aided by local abettors. Our Movement continues – the ppl have risen!” Chaos was witnessed outside the ECP office in Peshawar, as PTI members attempted to barge into the building. They were stopped by the police deployed outside the ECP office’s gate. PTI lawmakers from the Khyber Pakhtunkhwa Assembly, including Zahir Shah and Abdul Salam, were among the protesters, who raised slogans against the CEC, calling him biased.

They questioned as to why only the PTI’s funding was being investigated while other parties were not facing similar probes. The protest ended in Peshawar around 1pm. In Islamabad, former interior minister Sheikh Rashid and PTI leader Shibli Faraz spoke to the media during a protest demonstration outside the ECP office. Faraz said while his party was staging a “symbolic protest” outside the ECP office in the capital, thousands of party members were unable to reach the site of demonstration as “routes have been blocked”. But, he added, this would make little difference as “everyone knows that people from the across the country can gather even on an hour’s notice on the call of Imran Khan”. Referring to the PTI’s recent rallies in Lahore, Peshawar and Karachi, he said thousands of people had turned up at the public meetings out of their own will. “But since this government is an imported one, they have been inflicted with the disease of security,” he added. “Wherever they see a gathering of four people, their legs start shaking.”

The PTI leader further criticised the incumbent government for removing several names from the Exit Control List (ECL). “The way they have removed 3,000 names from the ECL, I would suggest that they even open the gates of the Kot Lakhpat Jail,” Faraz said. For his part, Rashid said even if the “government and entire establishment come together, they cannot stop the elections from taking place”. He went on to say: “Our position was not as good as it is now because of these fools.” Rashid added: “Robbers, looters and thugs are going to Saudi Arabia. They got their names removed from the ECL.” He further said Imran Khan had not made a formal call for protest yet, and once he did that, “the entire country will be in Islamabad”. Amir Dogar said the entire nation stood with Imran Khan. Without naming anyone and in an apparent reference to the ECP, he added, “You are bound to hold elections within 90 days.”

Making another vague remark and an apparent reference to the Supreme Court, he said: “The marble building had given that ruling with its one eye closed.”

Earlier, PTI’s Fawad Chaudhry and Farrukh Habib also criticised the government for placing containers and blocking routes to the ECP office in Islamabad. Chaudhry said in a tweet that the PTI was only staging a “token protest” outside ECP offices across the country. “And this foolish government has closed the entire country,” he added. Chaudhry said the move to block roads with containers signified that the government was “perplexed”. “What will become of them when we launch a proper movement?” he said. Habib, meanwhile, said staging a protest was the PTI’s democratic right, “but the way containers have been placed to block roads, it seems the legs of the incumbent imported government are shaking”.

He added that when the Pakistan Democratic Movement had staged a protest outside the ECP last year, when the PTI was in power, “we had given them the permission [to hold the demonstration] and provided them security and all other facilities”. In Lahore, a large contingent of police was deployed outside the ECP office and barriers were placed as citizens were barred from entering the building. Addressing the protesters outside the ECP office, PTI leader Mehmoodur Rasheed demanded that “turncoats [in the party] be de-seated and preparations be made for the next elections”.

“If the ECP does not mend its way, a protest would be staged daily,” he said, adding that a reference against dissident PTI members had been filed with the ECP and a decision on it should be made. Punjab Health Minister Yasmin Rashid said the ECP’s “partisan behaviour” was unacceptable and added that there was no need to delay the matter of “turncoats”. “These are the people who sold their consciences … and Pakistan,” she said, demanding that they be de-seated immediately. Another PTI leader Musarrat Jamshed said the ECP was working “an a US agent”, warning that if the dissidents were not held accountable, “the nation would hold you (ECP) accountable”. PTI Senator Ejaz Chaudhry remarked that with “this election commission [overseeing the matters], fair elections were not a possibility”. He said the PTI wanted fair elections, where votes were not bought and sold.