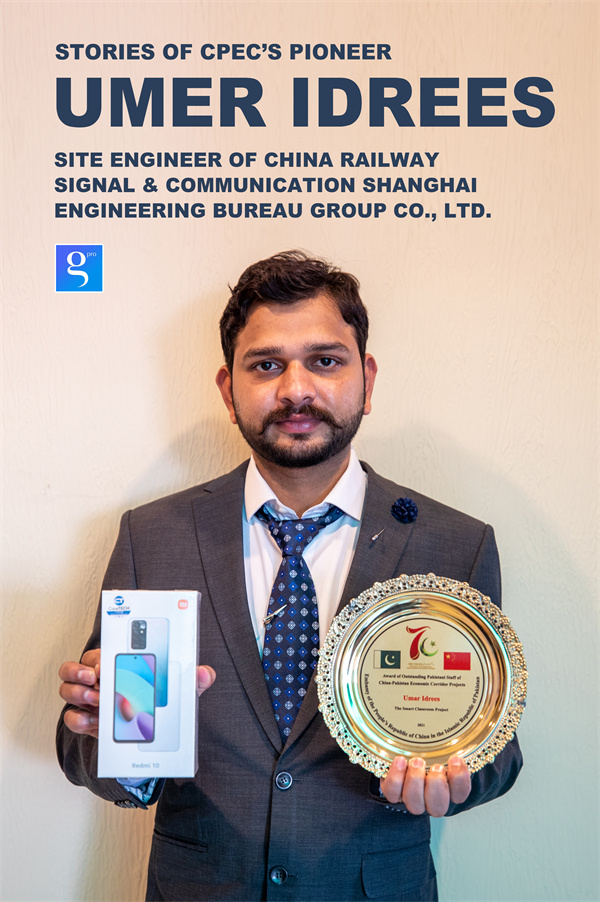 ISLAMABAD: China-Pakistan Economic Corridor (CPEC), fully loaded with expectations of the two peoples, is entering the eighth year since it was officially inaugurated.

According to Gwadar Pro, just in the year 2015 when CPEC officially kicked off, Umer Idrees, a young man from Lahore, graduated from Punjab University. So far, he has devoted almost all his career to CPEC.

“The objective of the project is to modernize the classrooms to improve the accessibility of students from one location to the best teachers located at another place, overcoming the limitation of physical distances,” Umer presented the project with pride. Now he is working as the site engineer.

According to Umer, the smart classrooms use a variety of digital tools including smart screens, smart boards, digital textbooks and audio-visual tools to make classroom learning more effective and engaging.

In the past decade, emphasis has been placed on improving higher education system and educational infrastructure by the Pakistani government.

Currently, a total of 100 smart classrooms are being built at 50 public universities in 49 cities from Hunza in the northernmost to Karachi in the far south, covering all the provinces and regions of Pakistan, which means the state-of-the-art educational resources will be better utilized and distributed for young people over the whole country in the near future.

“This Smart Classroom project will revolutionize our education system which we are following since the 20th century,” Umer has the confidence.

Working as the site engineer, actually Umer’s daily work is far beyond engineering. More importantly, he works as a ‘bridge’ of communication between the Chinese and Pakistani sides.

Involving as many as 100 classrooms in Pakistan, there’s a lot of complicated communication work to do during the whole project. In the view of Chen Chun, project manager from China Railway Signal & Communication Shanghai Engineering Bureau Group Co., Ltd., Umer’s role in the project is the key to success because it’s him who communicates with the universities as well as the construction team to ensure the whole project advance in a balanced and orderly manner. “His contribution to the project is huge,” Chen Chun said.

Simultaneously, Umer’s life and career have been nourished by CPEC. According to him, his income has been increased more than 50 percent compared with his previous jobs before involved in CPEC projects.

“A good income source is always helpful for us because it brings prosperity to me and my family. It is uplifting our way of living and social status,” he said.

Moreover, his skills of both engineering and communication have been greatly enhanced because the project is of the high-tech information industry. “This job is like a training session for me to improve my abilities. Our working environment is very good and seniors always support us and give us confidence to take decisions. My abilities have been much enhanced,” he said.

In last December, because of his excellent performance, Umer was awarded as one of the “Outstanding Pakistani Staff of CPEC for the Year 2021” by the Chinese Embassy in Pakistan. Approximately in this November, when those smart classrooms come into service, his diligent work will be felt by more people.

Looking into the future, Umer is still willing to work for CPEC, and grow with CPEC. “I am the eye witness that CPEC has produced lots of jobs for people of Pakistan. It helps them improve their incomes and lifestyle. From infrastructure to education system, CPEC has a great positive impact on our people’s daily life,” Umer said. Agencies