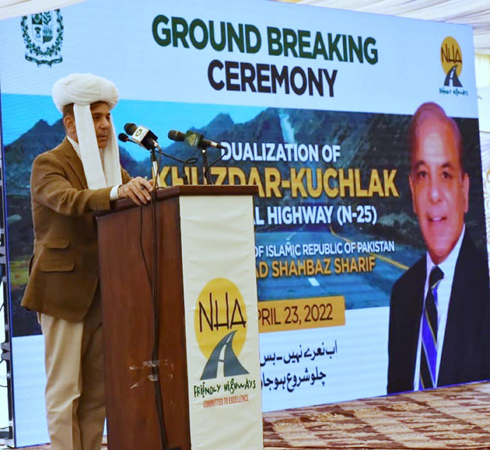 Prime Minister Shehbaz Sharif vowed Saturday to raise the issue of missing persons, as he promised to move Balochistan towards progress during his government’s tenure.

“I held meetings with the leaders here and all of them said the same thing. They said that development projects are important, but it is the other problems, predominantly the issue of missing persons, that need to be solved first,” the premier said while speaking at the groundbreaking ceremony of the 330-km Khuzdar-Kuchlak sections of N-25 Chaman-Karachi National Highway. “Today, I’m making a promise. I will speak for missing persons along with you,” PM Shehbaz vowed. “We will raise the issue with powerful quarters. And we will talk to them on the basis of law, justice and merit.” He stressed that it was important to raise the issue because it would otherwise create an air of “disappointment” and “sadness” in the province.

The prime minister was on his maiden visit to Quetta after assuming office, wherein he met the provincial leaders, reviewed the security situation, got briefed on development projects, and inaugurated a project as well.

Following the event, he spoke to journalists alongside government officials, where he said that the time has come to turn Balochsitan’s deprivation into development. “I will serve Balocsitan to the fullest of my capacity […] we will deliver better than the governments in the past,” the prime minister vowed. While chairing a meeting to review the administrative situation of the province during his day-long trip to the province earlier, the prime had said that the development of Balochistan was among the top priorities of his government. The prime minister said that the talented manpower of the province had been a precious asset for the country and directed to ensure monitoring of the ongoing uplift projects in the province.

The prime minister was apprised that a huge chunk of the population in the province was living below the poverty line due to a lack of employment opportunities. The government was undertaking different development projects and giving priority to the locals in job opportunities, said the chief secretary. The participants of the meeting presented various proposals and suggested making an announcement over a comprehensive package for the province. The proposals also pertained to the promotion of tourism around the coastal highway, and the establishment of professional training institutions for imparting education and training to the local manpower.