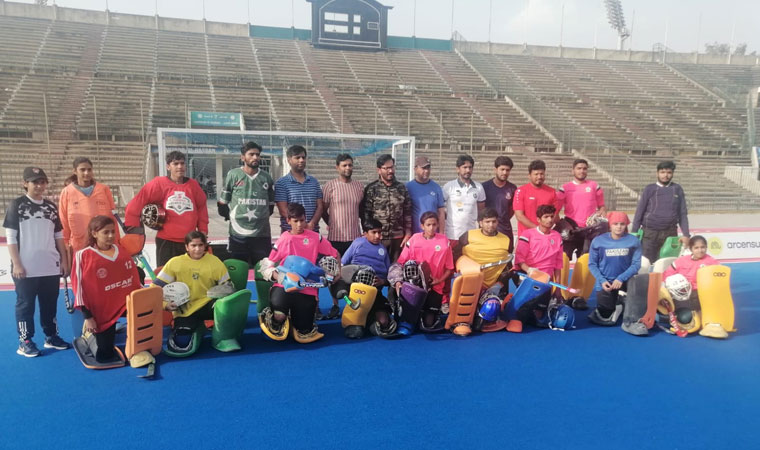 LAHORE: Pakistan’s first goalkeeping academy has been established under the wings of The Khawaja Junaid Hockey Academy. Former Olympian Khawaja Junaid Ahmed on Wednesday inaugurated the Goalkeepers’ Academy here at the National Hockey Stadium in which only goalkeepers will be coached. Initially, five girls and nine boys are part of this academy. The Khawaja Junaid Academy has given these goalkeepers a special goalkeeping kit free of cost. The patron of the academy Khawaja Junaid while talking to media yesterday explained the aims and objectives of the academy. He said that he was happy to launch Pakistan’s first goalkeepers’ academy. “A kit of goalkeeper is worth Rs 300,000. Only specialized coaches will impart training in the academy. The goalkeeping department of the Pakistan team is very weak. It is important to develop new goalkeepers. It is hoped that goalkeepers prepared and trained from this academy will one day be able to become part of the Pakistan team,” he added. Khawaja Junaid appreciated the appointment of a foreign goalkeeping coach for the national hockey team. He said that the national federation had taken a good step by appointing foreign coaches. “In the Europe tour, we hope to see a better goalkeeper.” On the occasion, Olympian goalkeeper and coach Imran Shah expressed his determination that he would do his best to transfer the experience to these goalkeepers.