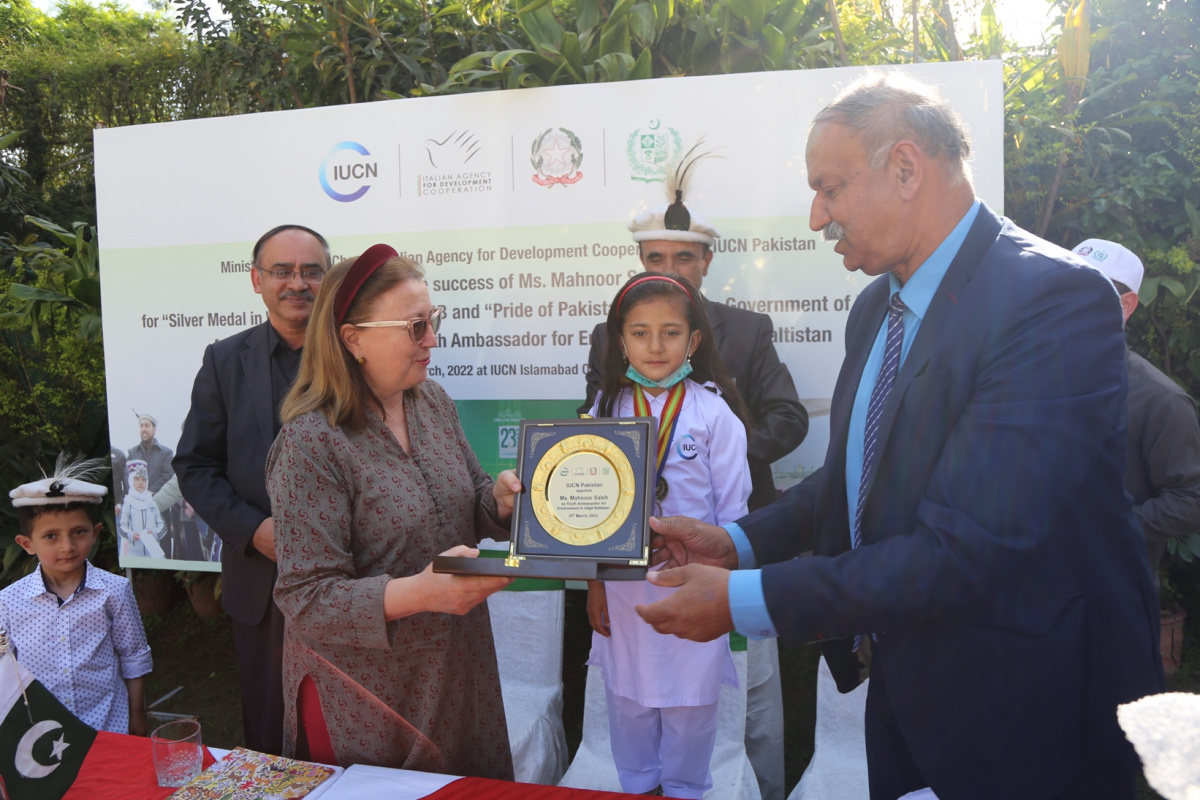 ISLAMABAD: The International Union for Conservation of Nature (IUCN-Pakistan) has appointed the country’s youngest athlete Mahnoor Saleh as the Youth Ambassador for Environment in Gilgit Baltistan, recognising her efforts to break the taboos and become a professional female winter sports player.

The IUCN-Pakistan in a ceremony officially celebrated the unprecedented contribution of Mahnoor Saleh hailing from the far-flung area of the mountainous region of Gilgit Baltistan (GB) which is home to one of the world’s highest peaks, glaciers and pristine biodiversity facing huge pressure due to environmental degradation.

Country Director Mahmood Akhtar Cheema said Mahnoor had made the whole nation proud of her by achieving silver medal and becoming the youngest athlete of the country at the age of four years and seven months in the national winter sports.

He said the IUCN-Pakistan had a journey of four decades to ensure biodiversity conservancy and community based eco-tourism in the northern areas where it had developed partnerships with local and international partners to carry forward its mission successfully.

“IUCN’s experience of linking its conservation efforts to sports or winter games in GB was an interesting experience that led to unearth the hidden gems of the northern areas and untapped  potential in the adventure sports”, he added.

Cheema appreciated her parents for their courage to allow their daughter to opt adventure sports and said he was thankful to her parents, government of Pakistan and Mahnoor herself to become the youth ambassador for environment.

“Mahnoor is an inspiration for all us to focus our efforts on environmental conservation and community development with a new and reinvigorated approach”.

He added that it was a great message for the women of Pakistan to believe in them and seek unconventional pursuits for betterment of the community like Mahnoor who approached the entire world from the remotest area of GB and got Pride of Pakistan Award at the Pakistan Day Parade.

Dr Saeed Abbas of IUCN in GB told the participants that the IUCN conducted the activity to engage local youth in Nagar District to partake adventure sports training and practice.

Almost 20 youngsters including five girls and one of the participants hailing from the remote Hopar Valley were trained to play ice hockey. Chairman Pakistan Tourism Development Corporation (PTDC) Aftab Rana said it was a new opportunity for Nagar Valley people to participate in the first ever national winter sports as they were trained to learn ice sports for the first time.

He congratulated Mahnoor Saleh and said she had broken all the taboos and brought laurels to the entire nation which was great contribution towards her community and society.

Mahnoor’s father Mr Saleh thanked the IUCN and Italian Agency Office for Development Cooperation (AICS) his family to get her daughter trained on ice sports. He mentioned that the journey was not that easy there was huge resistance from the local communities due to social taboos.

“Me and my wife brushed off all criticism and stayed the course to let our daughter achieve her goal”, he added.