* In a video shared by a paparazzo account, Shahid and Mira were seen posing for pictures before they entered Bastian Worli in Mumbai 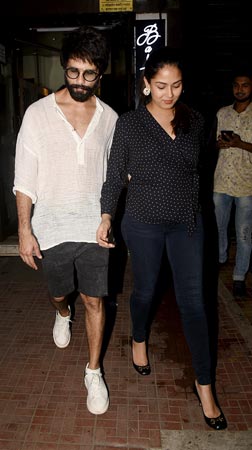 Shahid Kapoor recently stepped out for a family dinner with his wife Mira Rajput and her parents Vikramaditya Rajput and Bela Rajput. Mira’s parents, who live in Delhi, had joined the couple for a dinner outing in Mumbai. Mira’s father was seen holding his daughter’s hand and son-in-law Shahid’s shoulder as they headed into the restaurant.

Fans showered Shahid and Mira with compliments on the picture and called them the ‘cutest couple.’ One fan wrote, “Made for each other,” while another commented, “Mashallah.” A third one wrote, “Forever.”

Mira Rajput shared more glimpses of the outing on Instagram Stories. She shared a video that started with the menu, then showed her mother sitting in front of her, before capturing the decor of the restaurant. She also shared a picture of her parents, and wrote, ‘look who’s in town,’ adding a red-heart emoji.

Shahid is currently awaiting the release of his upcoming film Jersey. The sports drama, which also stars Mrunal Thakur and Shahid’s father Pankaj Kapur, was due to hit the screens on April 14, but the producers postponed it to April 22 due to a legal issue. The film was delayed earlier as well. It was set to release on December 31, 2021, but was postponed due to rising Omicron cases in India. Mira had shared a goofy video of Shahid on her Instagram account ahead of Jersey’s release, claiming that he creates drama whenever his film is about to release. In the video, Shahid said that Mira’s insults about his Instagram account really hurt him, but it’s his time now as his posts are getting a lot of engagements. Mira wrote on the video, “Isko Oscar pakda do koi.”