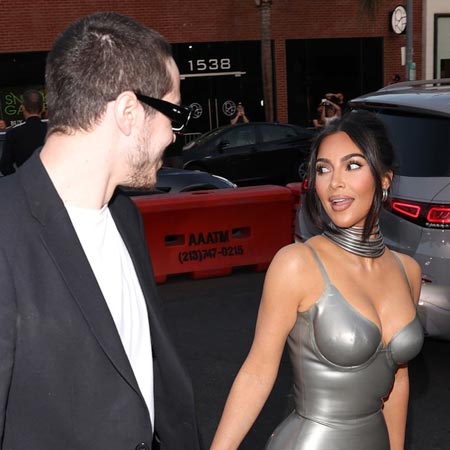 There’s no denying that Pete Davidson has some sort of, um, allure. Just ask Kim Kardashian.

The SKIMS mogul, 41, spoke about her relationship with the comedian, 28, during the April 12 episode of Dear Media’s Not Skinny But Not Fat podcast, sharing that she inexplicably felt drawn to Pete after the two had exchanged an onscreen kiss during a skit on Saturday Night Live in late October. When asked by host Amanda Hirsch if she sensed the “BDE that everyone talks about” following the smooch, Kim replied, “When we kissed, I was just like, ‘Hmm!'”

“It was a stage kiss, but it was still a little zing,” Kim continued. “It wasn’t anything like a super, crazy feeling.”

Noting that she then realized she hadn’t “kissed anyone else in 10 years,” Kim-who filed for divorce from Kanye West in February 2021 after six years of marriage-recalled thinking after her lip-lock with Pete: “I just got to get myself out there.” “A few days later, I was like, ‘Hmm, there is some BDE action,” she remembered, adding she was a bit bummed after finding out that Pete had missed her after-party following the show. “I thought about it later. I was like, ‘Damn, he’s the only person who didn’t come.'”

Kim sparked romance rumors with Pete in the following weeks after they were photographed holding hands at Knott’s Scary Farm in California. However, the reality star said that outing actually came after the pair had already “privately” spent time together at the Beverly Hills Hotel. She recalled of their first date, “We just chilled, hung out.” During her appearance on the podcast, Kim also set the record straight over her relationship timeline with Pete. According to the Keeping Up With the Kardashians alum, she knew of the King of Staten Island actor, but they didn’t really connect until after the 2021 Met Gala last September.

“He had been asking around for my number a little bit,” Kim shared. “I saw him at the Met and he knew I was hosting SNL but it wasn’t announced yet. He came up to me and we were talking about SNL.”

Kim remembered telling Pete how “nervous” she was about the gig, promoting the comic to offer her his phone number for advice.

“I had gloves on and I couldn’t get into my phone,” said Kim, who wore a full-body look that covered her fingers and face to the Met Gala. As a result, she recalled Pete brushing it off and walking away before she could give him her number. “We never connected or anything until [SNL].”

Still can’t keep up? Scroll on for the complete history of their romance.