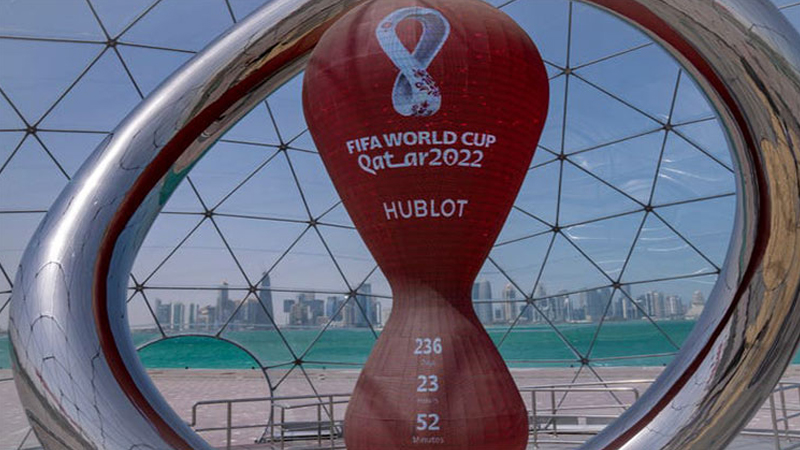 DOHA: The countdown towards the most controversial World Cup in history really begins on Friday as the draw for Qatar 2022 takes place in Doha, less than eight months before the start of the tournament itself. As pandemic restrictions ease, some of football’s biggest names will be there for the draw at a Doha convention centre among the skyscrapers of the city’s West Bay district, as holders France and their rivals find out who they will face in the group stage of the first World Cup to be held in November and December. The dust has still not settled on qualifying, with final matches in the North, Central American and Caribbean zone only concluding late on Wednesday and three berths to be decided in play-offs in June.

Seedings for the draw are based on the latest FIFA world rankings published on Thursday, and the seven highest-ranked qualifiers, including France, are in Pot One along with the host nation, despite Qatar being one of the lowest-ranked participants. The tiny Gulf state of under three million people stunned the planet when it won the right to host the World Cup at a vote in 2010, leading to accusations of vote-buying — which were hotly denied — and questions over the country’s suitability.

Off-field issues: The obvious issue was the extreme heat in June and July, when the World Cup is traditionally held, and so the decision was taken to move the tournament to the northern hemisphere winter. Then there has been the criticism of the working conditions of hundreds of thousands of migrant labourers in the country, including those who built the stadiums. That led to the threat from some countries of a boycott. “It’s ridiculous that we are going to play in a country, how does FIFA say it? To develop football there? It’s about money, commercial interests, that’s the main motive of FIFA,” said Netherlands coach Louis van Gaal recently.

The chief executive of Qatar’s World Cup Supreme Committee, Hassan al-Thawadi, called Van Gaal’s comments “ridiculous”, and FIFA president Gianni Infantino is fully embracing Qatar’s World Cup. “It will not only be the best World Cup ever, but also a truly unique one,” claimed Infantino, who has even temporarily moved to Doha. “I have never seen a country so ready to host the World Cup as Qatar.” For all the issues, there is excitement as a World Cup approaches, and FIFA announced on Wednesday that over 800,000 tickets had been snapped up so far.

Seven of Qatar’s eight World Cup stadiums are brand new. Most will be reduced in size after the tournament, while one will even be dismantled altogether. This week organisers have been eager to show off the gleaming infrastructure as the world’s media descend on Doha. There will though be inevitable questions about the fate of the migrant workers, however much FIFA and local organisers would prefer the talk to be solely about football. “It is critically important to ensure that migrant workers who made the tournament possible and were harmed in the process are not forgotten,” said Michael Page, deputy Middle East director at Human Rights Watch.

The last 32-team tournament: Even the draw itself cannot be separated from bigger issues beyond football. Russia’s invasion of Ukraine threw the European play-offs to decide the final three of UEFA’s 13 qualifying places into some chaos. Russia were suspended from all international football until further notice, preventing them from featuring in the play-offs. Ukraine’s play-off semi-final against Scotland was postponed until June, with the winner of that match facing Wales for a place in Qatar. England will certainly be there, with their manager Gareth Southgate dismissing talk of a boycott. Canada will be there too, for their first World Cup since 1986, but Italy are the biggest absentees from the draw after their disastrous defeat by North Macedonia last week ruled them out again, just like in 2018. Their next chance to qualify will be in 2026, by which time the World Cup will have been expanded to a bloated 48 teams. For all the controversy surrounding Qatar’s World Cup, at least it features 32 sides, split into eight groups of four, surely the perfect number for football’s global showpiece.