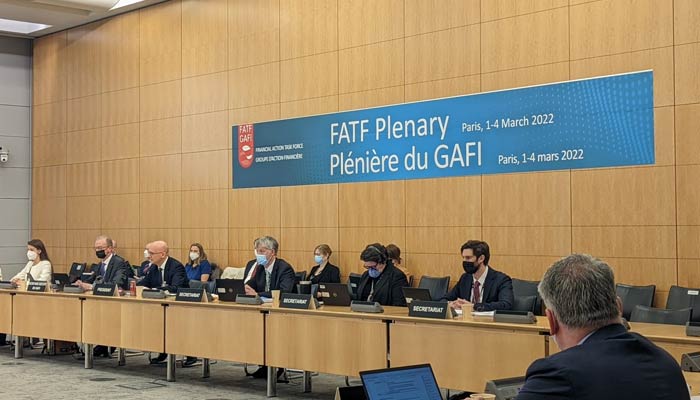 The Financial Action Task Force (FATF) in its review meeting recognized Pakistan’s continuing commitment to a sustainable and robust Anti-Money Laundering and Combating the Financing of Terrorism (AML)/CFT) frameworks.

The Financial Action Task Force (FATF) reviewed Pakistan’s progress on both FATF Action Plans in its plenary meeting held on March 4, said a press statement issued by the finance ministry on Saturday.

“The FATF members while participating in a discussion on Pakistan’s progress, recognized Pakistan’s continuing commitment to a sustainable/robust AML/CFT frameworks,” the statement said.

It added that Pakistan presented its case in an effective manner and also reaffirmed its political commitment to continue with the efforts to complete the Action Plans.

However, the Paris-based global money laundering and terrorist financing watchdog announced that Pakistan will remain on the grey list of the Financial Action Task Force (FATF) for another four months. The announcement was made on the fourth day of the virtual session in Paris.

It's the final day of the FATF plenary. Delegates from governments around the world and partner organisations, including the @UN, @IMFNews & @WorldBank, have been discussing key money laundering and terrorist financing issues. See more➡️ https://t.co/1ZKtE9vcX2 #FollowTheMoney pic.twitter.com/yQTM5ghIyq

With regard to the 2018 Action Plan, Pakistan has already completed 26 of the 27 Action Plan items while there was recognition by FATF that Pakistan had made significant progress towards addressing the last remaining action item.

The FATF encouraged Pakistan to continue to make progress to address, as soon as possible, the one remaining item by continuing to demonstrate that terrorist financing investigations and prosecutions are completed against the specified individuals.

The action items that have been completed during February 2022 Plenary cycle, include UN designations and restraining & confiscating proceeds of crime in line with Pakistan’s risk profile.

The remaining action item includes investigations and prosecutions of money laundering cases in line with Pakistan’s risk profile, on which major work has already been completed and acknowledged by the FATF.

Pakistan is making endeavors to complete the last two remaining items of both the action plans, as early as possible.

It is pertinent to mention here that the FATF Plenary meetings were held in hybrid format from 1-4 March 2022.

The finance ministry in a statement reiterated the government’s commitment to take all necessary measures to ensure completion of the remaining two Action Plan items during the upcoming FATF plenary cycle, to become eligible for exiting from FATF’s Greylist.