Getting to know host and compere Sidra Iqbal

* 'Currently, I'm the only one in media' 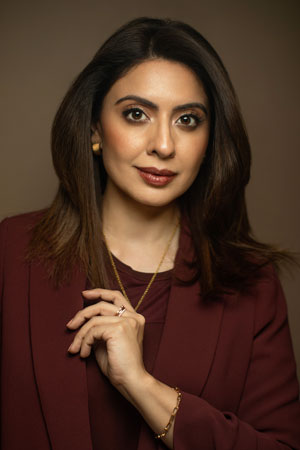 Tell us about your childhood. I’m from an all-girls household and we are three sisters in total. Since I’m the eldest, like any firstborn, my sisters looked up to me, and thus, I had a lot of responsibilities much like other Asian households. At the same time, I was very studious and would regularly partake in co-curricular activities besides sports. I wasn’t too sporty growing up. I was mostly interested in performance, concerts, elocution, theatre and public speaking. I genuinely enjoyed performing for people and especially loved being in the auditorium. I was also a very good student throughout my school years. I would be amongst the top three in the class. So, I was kind of a nerd with a knack for theatre!

How much influence your father has on your personality.

I have inherited a lot of my father’s extroverted traits. He was the original orator, public speaker and was an avid debater throughout his student life, especially in his university years, he was always known to be a charmer when it came to public speaking. However, I inherited discipline from my mother. She was always more studious, more organised and made sure everything is spick and span. She always has a to-do list and is way better at time management than my father. So, I have adopted those qualities from my mother. But my father is definitely the original media man in the family so a lot of people can see that I have taken that on from him.

Are any of your siblings in media?

Currently, I’m the only one in media. My younger sister completed her Master’s in Linguistics and Language. She also has three beautiful kids that she is working towards bringing up and she’s a full-time mommy these days. My youngest sister is in Academia. She just received her Master’s in Business Management. Although she was working with me for a little while, however, she moved to Canada and is working with the Seneca Colleges in Ontario.

‘I believe that my career path was written in the stars because I was always an avid public speaker and debater. Throughout my student life, I was in the centre of youth activism and youth-led leadership and as fate would have it, once I graduated, media just opened up in Pakistan and that’s how I became a journalist’

Tell us about your career path?

I believe that my career path was written in the stars because I was always an avid public speaker and debater. Throughout my student life, I was in the centre of youth activism and youth-led leadership and as fate would have it, once I graduated, Media just opened up in Pakistan and that’s how I became a journalist. It seemed like a natural progression to start talking about all the same subjects which I felt so close to my heart. Now, I can go deeper into those discussions and work towards ways forward. Today, I see myself as an impact activist, and I’m discussing similar subjects and how society responds to that means a lot.

Were you always willing to enter media or is it an accidental path? Do you intend to venture into acting?

It just seemed very natural to get into media. I really enjoy what I do. I have evolved and grown in my role and I have done all kinds of news in journalism. Be it be business journalism, current affairs, political systems, and now more of a socioeconomic thing, I enjoy it all but I don’t think I’m inclined towards acting just yet. I do feel that perhaps one day I might direct a story, a film, or a drama because that might be something I’m more inclined to do.

What is your daily routine?

My daily routine is very hectic. I work as a consultant and I carry on a number of projects in terms of marketing and designing communication strategies for brands, organisations. Along with that I have my daytime job which is to host and produce a morning show which takes up at least half of my day. It’s a good work-life balance. I try to spend the weekends with my family if I’m not traveling as well.

How do you see the progression of Pakistan’s media, particularly in the light of morning shows?

It’s no secret that a lot of people feel that the morning shows don’t have the kind of depth and diversity of subjects as they should. It’s less informative and more entertaining. To a lot of people, it’s something that irks them and they sometimes see it as useless television. I certainly see this as a creativity challenge. The double-edged sword is that if it’s too cerebral and too informative then it doesn’t hold the audience. To hold the audience, you have to be entertaining. That’s the balance we work towards striking and I think we can make that happen. In my particular show, I’m very happy with the way things have come around because I see people liking the kind of content that we do. I’ve never been pushed to pick up things that I’m not interested in. So yes, I feel that it’s a creative challenge for people to come up with something meaningful and at the same time interesting.

What aspects you keep in mind while selecting topics for your morning show?

My idea is to add a meaningful angle to all the stories that I cover. I try to deep dive into it. I also try to get into the mind of some of my viewers because sometimes when we are trying to produce meaningful content, we make it so difficult, so complicated that it switches people off. I think my endeavour is to always look at a laymen’s opinion, people who are not subject experts but if they were to take away something from that conversation, I see that as a win.

Do you see women contribution in various sectors is rising? Also is women empowerment is just a buzz word or are we really moving towards it?

I believe that if we will be discounting a lot of women’s efforts if we turn around and say that we are not making progress. However, is the progress all inclusive? Is every quarter improving? That’s the question mark. Life is getting better for a lot of women in part. They are provided with equal opportunities but it’s still not the majority. There are still lots of people who struggle with the basics. For example, my basics, coming from a well-educated, upper-middle-class, urban background would be very different from a girl’s struggle who is living in rural or suburban areas where there is a very different state of mind. But the way I see it, every woman who achieves something is a beacon of light, a lighthouse, someone who is showing the view to many hundreds if not thousands of others. In those terms there definitely is progress.

What is your message for country’s youth?

My message to the country’s youth is to believe in your own dreams. Nothing is impossible but you must be willing and ready to put in the hard work. If one door closes another opens. As the age-old adverb states, we take so long in looking at the closed door that we are unable to see the opportunity that has just come out of nowhere for us. So, just be patient, have faith, and work hard!